A video shared hundreds of times on Facebook in South Africa and Zambia claims that mRNA Covid-19 vaccines contain cells taken from aborted human foetuses. The claim is false: the World Health Organization and the National Institute of Communicable Diseases (NICD) in South Africa told AFP Fact Check that Covid-19 vaccines do not contain cells from aborted foetuses or other human tissue.

The three-minute clip has been shared more than 330 times since it was posted on Facebook on July 17, 2021.

Besides including the claim that mRNA Covid-19 vaccines contain aborted human foetal matter, the video makes two other unsubstantiated claims: that the vaccines can alter a person’s DNA and that they can render people sterile. 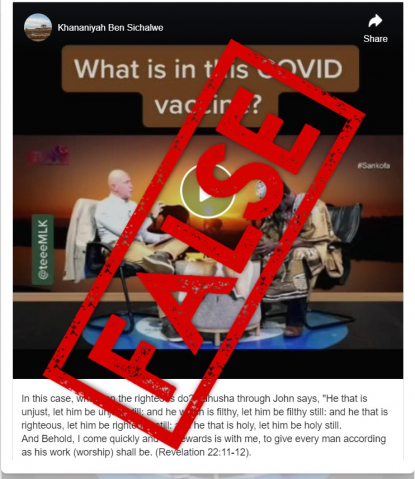 The clip, which was extracted from a longer video originally posted here on YouTube on February 5, 2021, features preacher Joshua Maponga interviewing guest Mike Southwood in a show dubbed “why Africans should not take vaccine (sic)”.

The Zimbabwe-born Maponga lives in South Africa and is an author of several books and has a large following on social media. He also runs Galaxy Universal Network, a media production company in South Africa.

Southwood — who makes the false and unsubstantiated claims during his interview — is the founder of the Unity Group in South Africa, which styles itself as a governance reform movement. According to media, Southwood is also the administrator of the #EndTheLockdownMzanzi group, which has been urging South Africans to defy Covid-19 lockdown laws.

A shorter version of the clip was published here on Facebook in South Africa on July 15, 2021, and shared more than 600 times.

Pfizer/BioNTech and Moderna Covid-19 vaccines are made from messenger RNA. The two vaccines work by giving a “blueprint” of a part of the virus that the body can then recognise and fight when confronted by it later.

The vaccines use tiny fat bubbles called lipid nanoparticles to encapsulate fragile mRNA molecules and the information they contain to protect them until they can be safely delivered into cells without being degraded by the body’s enzymes.

However, the claim made in the clip that the vaccines include aborted foetus cells is false.

No material from aborted foetuses

“They are produced through high-tech molecular biology approaches and in cultures in rigorously controlled laboratories,” said Moore.

The World Health Organization (WHO) told AFP Fact Check that “the new mRNA vaccines, such as those developed by Pfizer and Moderna, are synthetic vaccines and do not use foetal cell lines in their production.”

What are cell lines?

According to the WHO, vaccines are made by growing cultures of the target virus or bacterium: “Viruses need to grow in cells and so vaccine viruses are often grown in eggs (such as the influenza vaccine) or in cell lines derived from mammals, including humans.”

The cell lines that are used to grow the viruses originate from a primary culture of cells from an organ of a single animal that has been propagated repeatedly in a laboratory, often over many decades.

The best known human cell line is MRC-5, or Medical Research Council cell strain 5, which are cells used to grow viruses for vaccines against rubella, chickenpox and hepatitis A in laboratories. MRC-5 was originally derived from the lung tissue of an aborted foetus in the 1960s but has since been grown without recourse to foetal tissue.

The History of Vaccines, an educational tool developed by the College of Physicians of Philadelphia, states that “in total, only two foetuses, both obtained from abortions done by maternal choice, have given rise to the human cell strains used in vaccine development”.

The Johnson & Johnson Covid-19 vaccine — which is not an mRNA but a viral vector vaccine — used a human cell line developed from the retinal cells of a foetus aborted in 1985 in its early production stage. But, the WHO said, “no foetal material is present” in the final J&J Covid-19 vaccine product or any other vaccine that uses human cell lines in early production stages.

A spokesperson for the Oxford Vaccine Group, an organisation that was involved in producing the AstraZeneca Covid-19 vaccine, told AFP Fact Check that during its development, they used HEK-293 cells.

The HEK-293 cell line was originally cultivated from a foetus aborted in the Netherlands in the early 1970s.

The NICD’s Moore added that human cell lines were used only in the early stages of the production of some vaccines. “For all vaccines that use cell lines during early production stages, all cells are removed during the purification process and the final vaccine product does not contain this material.”

The WHO told AFP Fact Check that it is not aware of any vaccines currently being developed for Covid-19 that contain cell lines obtained from foetal tissue.

The unsubstantiated claim that mRNA vaccines can modify human DNA has been widely rejected by scientists. AFP Fact Check has previously debunked the claim here and here.

Matthew Miller, an associate professor with the Department of Biochemistry and Biomedical Science at McMaster University in Canada, was quoted in a previous AFP Fact Check from March 2021 as saying that “mRNA is the code for proteins. It does not alter the DNA of your cells. Indeed, your cells naturally make mRNA from DNA.”

Barry Pakes, an assistant professor at the Dalla Lana School of Public Health at the University of Toronto, told AFP Fact Check in April 2021 that “the mRNA cannot be integrated into the human genome. We (humans) lack the enzymes to reverse transcribe mRNA to DNA”.

The US Center for Disease Control and Prevention (CDC) also refutes the claim that Covid-19 vaccines can alter people’s DNA.

“Covid-19 vaccines do not change or interact with your DNA in any way. Both mRNA and viral vector CovidD-19 vaccines deliver instructions (genetic material) to our cells to start building protection against the virus that causes Covid-19. However, the material never enters the nucleus of the cell, which is where our DNA is kept,” the organisation states on its website.

Vaccines do not cause infertility

In the video, Southwood claims that Covid-19 vaccines can cause infertility. “We believe that there are a lot of things in this vaccine that will render people sterile…”

The CDC states on its website that “there is currently no evidence that any vaccines, including Covid-19 vaccines, cause fertility problems (problems trying to get pregnant)”.

Kate White, an obstetrics and gynaecology professor at Boston School of Medicine, told AFP Fact Check in March 2021 that “there’s no vaccine in the world that can cause infertility”.

Dasantila Golemi-Kotra, a microbiologist at York University, told AFP that “vaccine-induced antibodies against SARS-CoV-2 spike protein are unlikely to cross-react with the syncytin-1 or -2 in the body and lead to infertility”.

Golemi-Kotra explained that the misinformation could be stemming from the fact that the anti-spike protein antibodies and the syncytin-1 protein of the placenta share a “very short amino acid region”.

But this doesn’t mean that the immune system would attack the syncytin protein. The immune system can “recognise a surface in their target protein, which rarely is confined to a single short amino acid sequence,” she said.