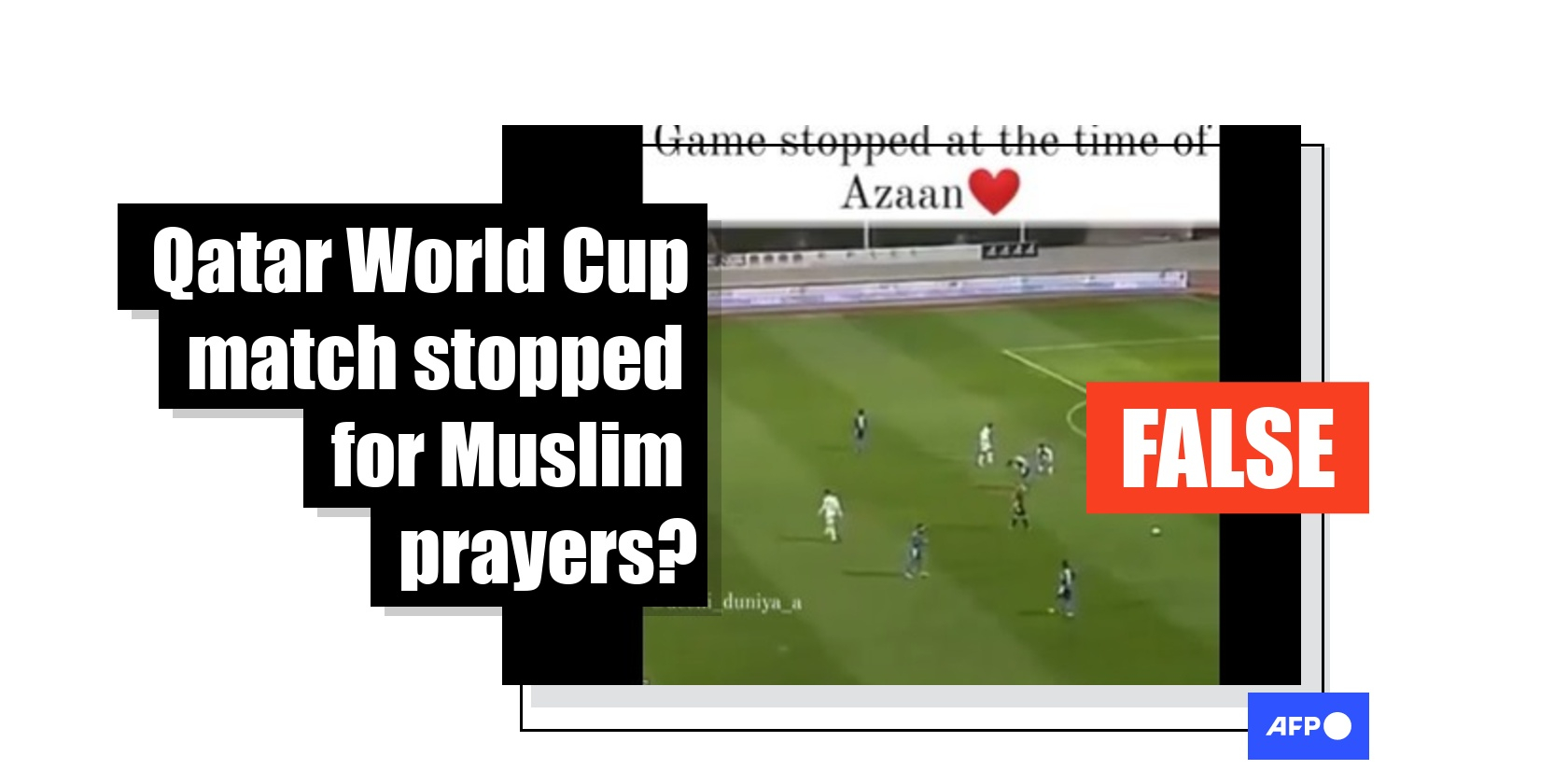 Clip shows match stopped for Muslim prayers in Saudi Arabia in 2018, not during Qatar World Cup

A clip of a football match being stopped as the Muslim call to prayer is heard has been viewed thousands of times in social media posts that falsely claim this happened at the 2022 World Cup in Qatar. The video is in fact from a match in Saudi Arabia between the Al-Feiha and Al-Fateh football clubs in 2018.

The clip was shared on Facebook here on November 28, 2022, and has since been viewed more than 700 times.

It shows a football match interrupted by the sound of the Azaan, or Muslim call to prayer. The referee then blows his whistle and goes to pick up the ball to halt play -- a gesture that appears to be applauded by fans in the stadium.

Text on the video reads, "Game stopped at the time of Azaan. Ma Sha Allah."

The post's Hindi-language caption reads in part: "Match at the world's biggest, most expensive and fast-paced World Cup was stopped at the time of Azaan. 'Mashallah' management of Qatar."

"Mashallah" is an Islamic term of praise. 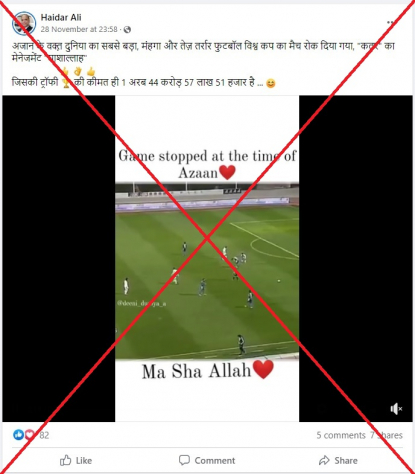 The clip circulated with the false claim a week after the football World Cup kicked off in Qatar -- the first World Cup in a Muslim nation.

The same 27-second clip was also shared elsewhere on Facebook alongside similar Hindi-language claims here and here; and on Twitter here and here.

The clip, however, does not show a halt in play for prayers at the Qatar World Cup.

Keyword searches on Google found the clip corresponds to a longer video featured in a tweet by British sports website The Sportsman here on January 25, 2018.

The tweet's caption reads: "Huge respect to Mark Clattenburg after he stopped a Saudi Arabian Cup game in the 95th minute when a call for prayer came over the speaker."

The clip in the false posts corresponds to the two-second to 29-second mark of the video shared by The Sportsman.

The Sportsman's tweet was embedded here in an article published by the Muslim Council of Hong Kong on January 26, 2018.

According to the article, Clattenburg -- a former English Premier League official -- suspended the Saudi King's Cup match between Al-Feiha and Al-Fateh for two minutes when the call for prayer from a nearby mosque could be heard in the stadium.

Below is a screenshot comparison of the clip in the false posts (left) and the 2018 video (right):

Clattenburg's actions were covered in reports by Al-Jazeera here and the BBC here. The latter report said the referee earned "widespread praise from football fans in the country".

AFP has debunked other false and misleading claims about the World Cup in Qatar here.