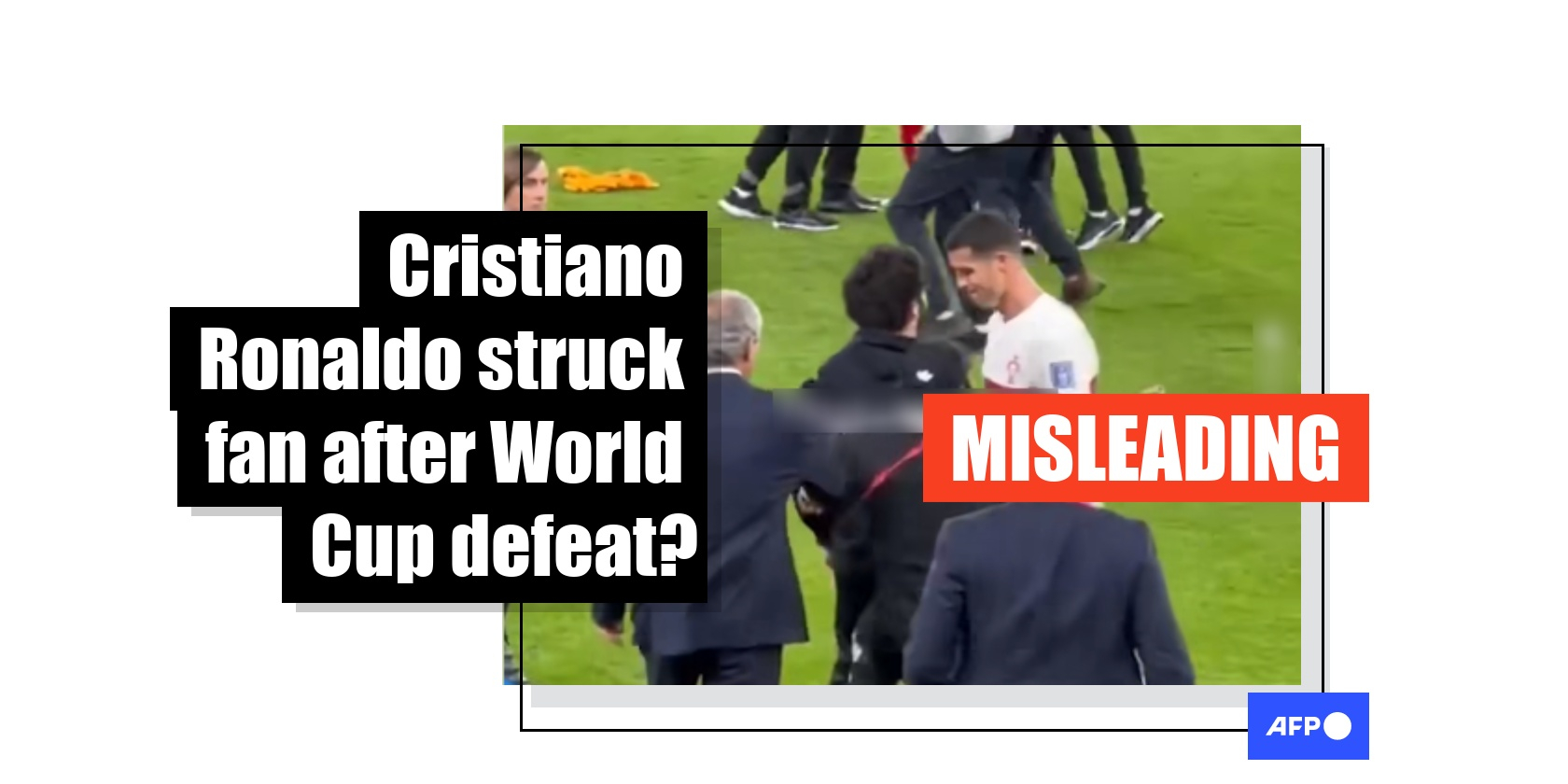 Social media users are claiming a video shows Portugal football star Cristiano Ronaldo striking a fan in frustration as he walked off the field following his side's defeat to Morocco in the 2022 World Cup quarter-finals. This is misleading; other angles of the moment show a security guard bumping into Ronaldo while rushing to pull the pitch invader away.

"Cristiano Ronaldo got mad and pushed a fan after Morocco’s win over Portugal," says one December 11 video on Facebook, which received more than 22 million views.

The video offers a close-up view as Ronaldo, in tears, was interrupted while making his way to the Qatar stadium's tunnel after the Portugal team he has long captained fell 1-0 to Morocco in what may have been the 37-year-old's final World Cup appearance. 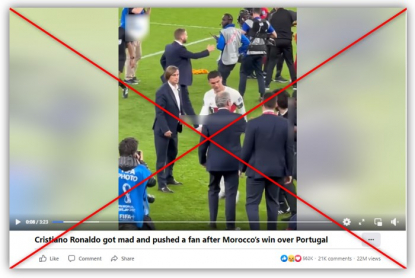 Posts sharing the same clip alongside claims that it shows Ronaldo shoving or punching a fan cropped up in various countries and languages across Facebook, TikTok, Twitter and YouTube.

The posts took off as the World Cup came to a close with Argentina winning in a dramatic final over France, a result that left Lionel Messi strengthening his case in a long-running debate against Ronaldo over who is the greatest footballer of the generation.

"Ronaldo hit a fan after full time of today's match vs Morocco and there’s been no words on it," some of the posts say. "Messi got hat-ed by the entire internet for celebrating yesterday vs Netherlands."

But the social media captions describing the clip as an outburst from Ronaldo are misleading.

While the close-up angle in the video shared online gives the impression that Ronaldo shoved the person, other videos AFP found on social media and elsewhere online offer additional vantage points and paint a more accurate picture of what happened.

The videos -- including on-the-field footage from Fox and a recording posted to Twitter by a football writer for The Athletic -- reveal that as the pitch invader stepped in front of Ronaldo, a sprinting security guard wrestled him away. The guard appeared to run into Ronaldo in the process, causing him to stumble backward and flail his arm out.

The former Real Madrid and Manchester United forward seemed to be looking down and shaking his head until the contact, which left him startled more than anything else.

Cristiano Ronaldo first player off the pitch, don’t think he even noticed the pitch invader. Straight down the tunnel in tears. That’s his World Cup dream over. pic.twitter.com/oFHHQC3Oub

.@Cristiano walking off the pitch one last time in a World Cup #WorldCup2022#Portugal#Morocco#QatarWorldCup2022#FIFAWorldCup#Qatar2022pic.twitter.com/PHNzIiLdcC

A lot of Cristiano Ronaldo haters were saying he pushed a fan when he walking off the pitch in Portugal’s defeat to Morocco, hopefully this video from this angle puts this to bed & see he didn’t push the fan & it was a security guard. pic.twitter.com/MQpLzQA62c

"Don't think he even noticed the pitch invader," Daniel Taylor, The Athletic journalist, tweeted. "Straight down the tunnel in tears."

AFP also captured pictures of the incident -- including one showing the security guard's arm in contact with Ronaldo's. 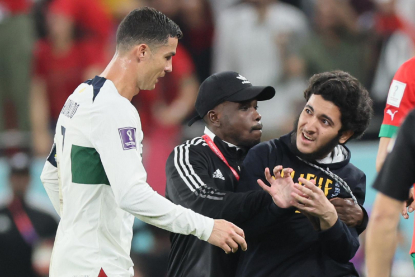 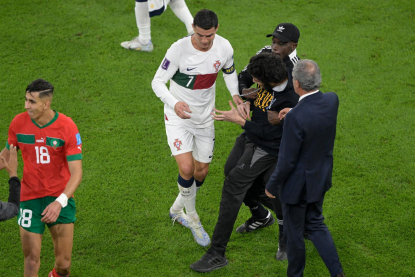 A pitch invader is caught next to Portugal's forward Cristiano Ronaldo as he leaves the pitch after losing to Morocco in the Qatar 2022 World Cup quarter-final football match between Morocco and Portugal at the Al-Thumama Stadium in Doha on December 10, 2022 ( AFP / JUAN MABROMATA)

Reached by AFP, a representative for Ronaldo did not offer comment.

AFP has debunked other misinformation about the World Cup here.