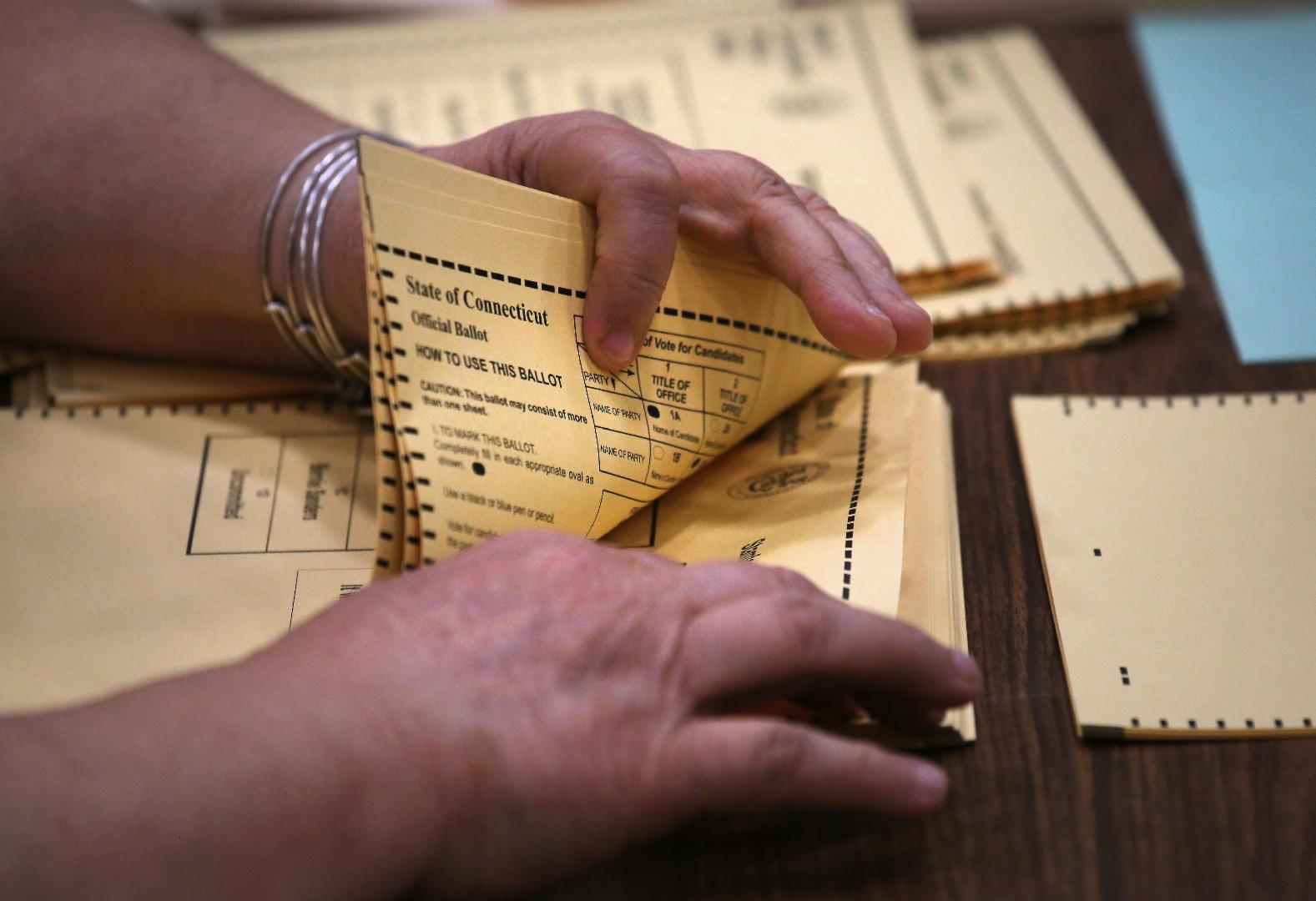 A rumor on Facebook claims Connecticut voters will soon decide whether to scrap "security seals" from certain ballots in future elections. This is false; the proposed amendment to the US state's constitution, the main purpose of which is to allow the passage of laws about early voting, would remove out-of-date language about wax seals once used when sending election results -- not change existing ballot security.

"Pay close attention Connecticut voters !!!" says text in an October 18, 2022 Facebook image that warns about "a ballot initiative to amend the CT State Constitution to allow the General Assembly (run by Democrats) to alter the voting laws to allow early voting."

The proposal, the post claims, would also "remove the requirement of a certified seal from certain ballots when submitted to the Secretary of State (meaning that certain ballots don't have to have security seals to be processed because we can trust them wink-wink-nudge-nudge saynomore)." 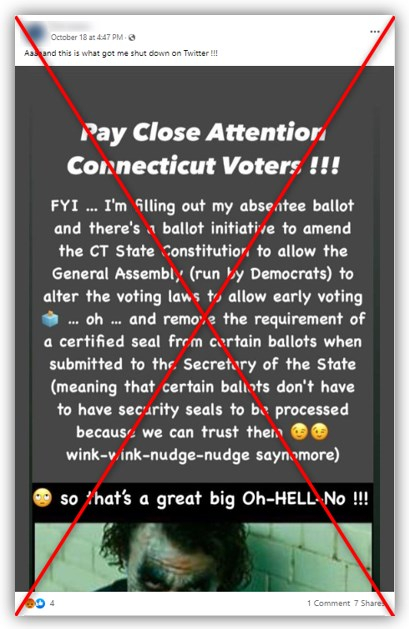 The false claim comes in the final weeks of campaigning for the US midterm elections -- the first since the 2020 presidential race that former president Donald Trump and his allies falsely claimed was tainted by fraud. Misinformation about the 2022 contests has already circulated online, and experts warn more is likely to spread as November 8 draws closer.

The notion that Connecticut's ballot question is part of a sinister plot to chip away at election security is "just a lie," said Cheri Quickmire, executive director of the Connecticut chapter of Common Cause, a non-profit watchdog organization.

"It's absolutely just not true," she said.

Connecticut is one of four states that do not allow early voting in person before Election Day, according to the National Conference of State Legislatures. The other three are Alabama, Mississippi and New Hampshire.

Absentee voting is allowed in Connecticut, but only for those who cannot make it to the polls on Election Day due to illness, military service or other approved reasons.

"The state constitution contains several provisions about the time, place, and manner of elections in Connecticut. These provisions currently require voters to cast their ballots at their polling place on the day of an election unless they qualify to vote by absentee ballot," says a summary of the proposal from the Connecticut Office of Legislative Research. "Because these are constitutional requirements, the General Assembly cannot pass legislation establishing a form of voting that conflicts with them."

A ballot proposal in Connecticut -- House Joint Resolution No. 59 -- would change that. Specifically, the amendment would add language to the state's constitution allowing the General Assembly to pass laws related to early voting.

The question on Connecticut voters' ballots asks: "Shall the Constitution of the State be amended to permit the General Assembly to provide for early voting?" 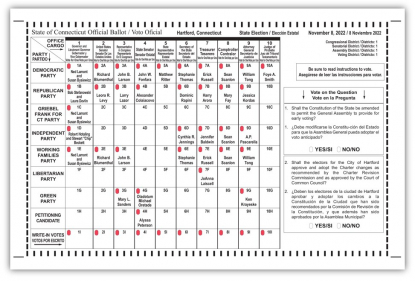 Screenshot of a sample ballot for Hartford, Connecticut in the November 2022 midterm elections, posted online by the Connecticut secretary of state's office

Quickmire noted that the proposal says "nothing about removing seals from voters' ballots."

"I mean, there are no seals on voters' ballots in Connecticut," she said.

Desmond Conner, communications director for the Connecticut secretary of state's office, told AFP in an email that the reference in the amendment to seals is about "removing antiquated language regarding the use of an old-fashioned wax seal that was used in the 1800s."

Conner said the language change "has nothing to do with seals on voting machines or ballots."

The Facebook post is a "major misinterpretation" of the amendment, added Diana Evans, professor emerita of political science at Trinity College, in a statement shared with AFP by Common Cause.

"This provision just removes an archaic constitutional requirement for how the results are to be delivered to the state," said Evans, vice chair of the advisory board for the group's Connecticut chapter. "Results are now delivered in a modern secure manner."

Like in other states, Connecticut takes multiple steps to secure ballots, whether they are cast in person or by mail.

AFP has fact-checked other false and misleading claims about the midterms here, here and here.