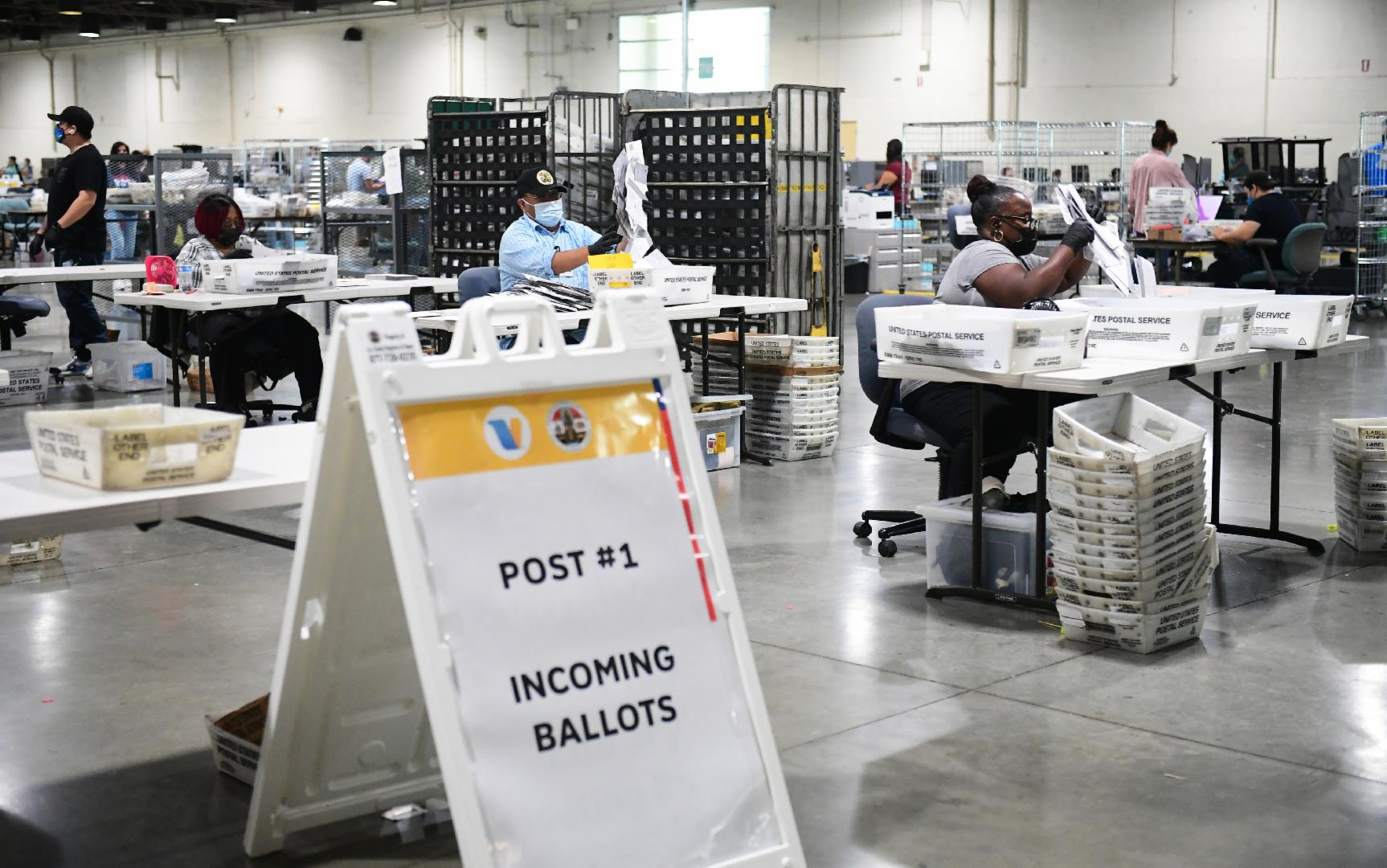 Mail-in ballots for a recall election are processed at the Los Angeles County Registrar building at the Fairplex in Pomona, California on September 9, 2021 ( AFP / Frederic J. BROWN)

US Postal Service quashes rumors about ballots with insufficient postage

The US Postal Service (USPS) says it will deliver absentee ballots with insufficient postage during the 2022 midterm elections, but some social media users claim votes returned without two stamps will not count in states such as Alaska and Ohio. This is misleading; while many states do not prepay postage, USPS's policy is to ask local officials to foot the bill for ballots that come up short.

"Alaska absentee voter trickery: will a single USPS 1st Class stamp deliver your ballot? NO. Will DOE will pay the postage due? NO. Will your vote still count? NO," says an October 16, 2022 Facebook post sharing a now-deleted tweet.

Another tweet posted the same day says: "For OHIO Vote By Mail voters. Since we are sent a 2 sheet ballot, we MUST use 81 cents return postage (two Forever Stamps works). Failure to use correct postage will likely result in your votes not being received and not being counted!" 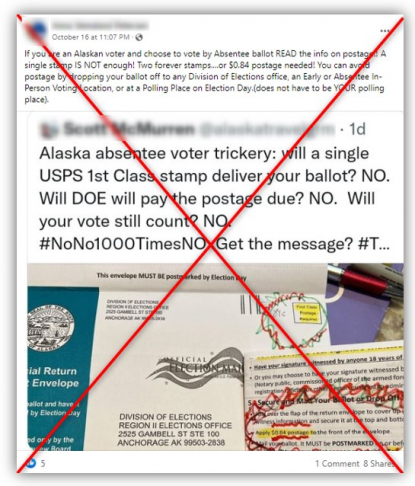 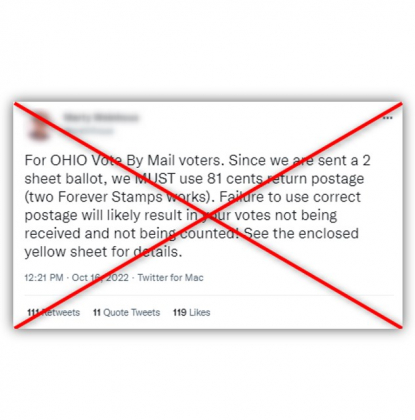 The posts were surfaced to AFP by the University of Washington's Center for an Informed Public. The online confusion mirrors misleading claims that spread ahead of the 2020 US elections, which saw a surge in absentee voting because of the Covid-19 pandemic.

Other recent posts sounding the alarm about the postage needed to return ballots in Alaska and Ohio -- two states with US Senate seats up for grabs -- popped up across Facebook and Twitter. Politicians in both states called for voters to check their stamps.

"Alaskans who are voting by mail need 84 cents of postage on their ballot," said US Senator Lisa Murkowski, a Republican, in an October 18 tweet. "Alaska: Make a plan to vote today -- and make sure you have the most up-to-date information to make your voice count."

Nineteen US states and the District of Columbia require local election officials to prepay return postage for absentee ballots, according to the National Conference of State Legislatures. Military and overseas citizens get postage costs covered under federal law.

Alaska and Ohio are not among those 19 states. That means voters casting ballots by mail are expected to cover the postage cost, which depends on the weight of the package.

But while experts say it is smart to use the proper number of stamps, the USPS's election mail guide from January 2022 says: "Shortpaid and unpaid absentee balloting materials will not be returned to the voter for additional postage."

The agency's policy is "not to delay the delivery of completed absentee balloting materials," agency spokesperson Martha Johnson confirmed to AFP.

"Each state, or local board of elections if authorized, determines whether to provide voters with a pre-paid return envelope for mail-in ballots or to request that voters apply their own appropriate postage," Johnson said. "In cases where a ballot enters the mail stream without the proper amount of postage, the Postal Service will deliver the ballot and thereafter attempt to collect postage from the appropriate board of elections."

Most jurisdictions will accept the costs, said Tammy Patrick, senior adviser to the elections program at the Democracy Fund.

Patrick, who worked for 11 years as an elections official in the state of Arizona's most populous county, said she does not know of any instance where workers refused to count an otherwise qualified ballot just because it lacked the proper postage.

"Nowhere is there a rejection requirement, that if a voter does not pay that postage, the ballot is rejected," Patrick said.

Ballots can be disqualified for other reasons, including issues with signatures or because they arrive late.

The USPS requires election officials in states that do not prepay postage to spell out how much is needed, Johnson said.

In Alaska, mailed ballots include return envelopes that have a box for one stamp that says "First Class Postage Required." They also include instructions telling voters to "apply $0.84 postage to the front of the envelope," according to scans published by the Alaska Beacon.

The price for one first-class stamp, which does not expire, is 60 cents, the USPS website says. Postage for first-class letters between one and two ounces costs 84 cents.

The Alaska Division of Elections said in an October 17, 2022 Twitter thread that the state's ballot return packages weigh slightly more than one ounce.

"Any mail over 1.0 ounce causes postage to increase from 60 cents (one forever stamp) to 84 cents," the division said. "Realizing that scales may vary, the division felt it was best to go with the higher number in the instructions."

But the division clarified that "ballots that meet statutory requirements are eligible to be counted." Ballots must arrive within a certain timeframe after the election, be postmarked before Election Day and include voter and witness signatures.

AFP contacted the Alaska Division of Elections for further comment, but no response was forthcoming.

In Ohio, some voters also received absentee ballots with instructions to attach 84 cents of postage, the Cleveland Plain Dealer reported.

Asked if votes without proper postage would be counted, Rob Nichols, a spokesman for Ohio Secretary of State Frank LaRose, sent AFP a link to a 2020 fact check about the USPS policy to deliver all mail-in ballots.

"Postage may vary by county based on how many local races are on the respective ballot," Nichols added, "but Secretary LaRose requires each county board of elections to specify the correct postage for the respective ballot on the instructions that come with each ballot."

Voters who are worried about postage can return their ballots through a secure ballot drop box or, in some states, at a designated polling place, said Gerry Langeler, director of research at the National Vote at Home Institute.

AFP debunked other misinformation about voting in the 2022 midterm elections here.