Posts on social media platforms claim Home Depot donated $1.75 million to US Senate candidate Herschel Walker. This is false; public records show no such contribution from the home improvement retailer, but a donation in that amount came from a co-founder who is no longer affiliated with the company. 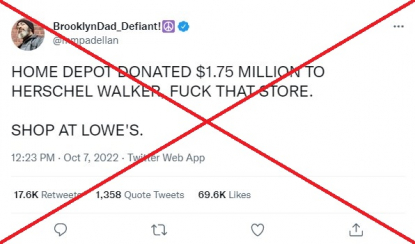 Walker, a former football star, is challenging Democratic US Senator Raphael Warnock in the midterm elections to represent the state of Georgia. The race is one of four pivotal battlegrounds that will decide which party controls the Senate in the last two years of Joe Biden's presidency.

The Home Depot, a giant home improvement chain, tends to contribute to Republican political candidates, according to OpenSecrets, a nonprofit that tracks campaign finance data. However, the claims circulating online are inaccurate.

"The Home Depot PAC hasn’t donated to Walker’s or Warnock’s campaigns," said Sara Gorman, a spokesperson for the Home Depot, in a statement emailed to AFP.

Publicly available data from the Federal Election Commission (FEC), which regulates campaign finance in the US, back that up.

The Home Depot PAC had not contributed to Walker or Warnock's campaigns as of October 17, according to the FEC's database. The retailer publicly dispelled rumors claiming otherwise in an October 7 tweet.

Hi Nathalie, the company has not contributed to this campaign. The contribution was from our co-founder Bernie Marcus, who left The Home Depot more than 20 years ago.

"The company has not contributed to (Walker's) campaign," the Home Depot said in response to a post calling for a boycott. "The contribution was from our co-founder Bernie Marcus, who left The Home Depot more than 20 years ago."

Marcus, 93, announced his retirement from Home Depot in 2001 and no longer is a member of the board of directors.

Gorman said Marcus' views "do not represent the company," noting that the Home Depot's "associate-funded PAC supports candidates and organizations on both sides of the aisle."

The Home Depot PAC has donated to both Republican and Democratic causes this election cycle, according to OpenSecrets. However, nearly three-quarters of its contributions to other PACs have gone to groups supporting Republicans -- and nearly 60 percent of donations to federal candidates have gone to Republicans.