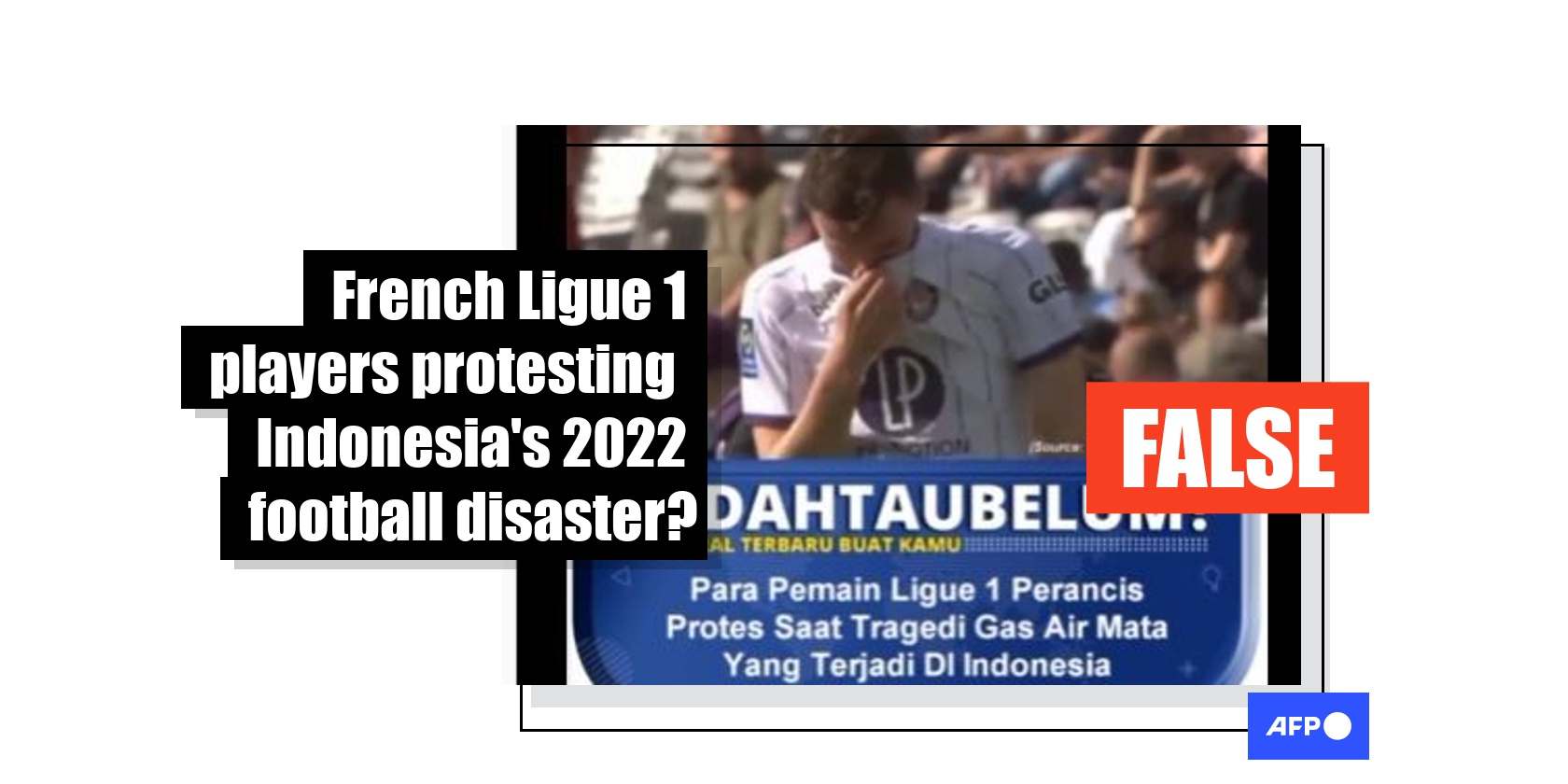 A video has been viewed hundreds of thousands of times in social media posts that falsely claim it shows football players in France covering their noses to protest over the use of the use of tear gas at Indonesia's Kanjuruhan stadium on October 1, 2022, when a stampede led to the deaths of more than 130 people. The video in fact shows some players affected by tear gas used by police against visiting fans during a match on October 2, 2022.

"Have you heard about this? French Ligue 1 football players protested the tear gas tragedy that happened in Indonesia," reads Indonesian-language text in a video posted on Instagram here on October 4, 2022.

The 44-second video, which has been viewed more than 119,000 times, shows a football player covering his nose with his shirt as others appear to leave the pitch.

The post's caption falsely claims players covered their noses as a protest gesture over "the use of tear gas which violated FIFA regulations" and "as a form of respect to Aremania". 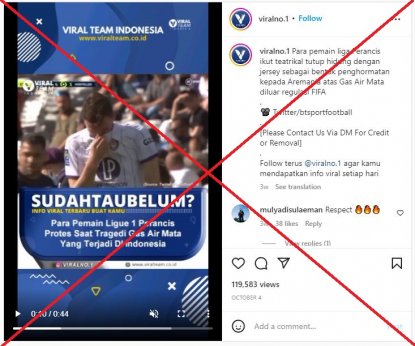 A screenshot of the misleading post, taken on October 26, 2022

The video circulated after a pitch invasion and a stampede prompted by police firing tear gas left more than 130 people dead at the Kanjuruhan stadium in the Indonesian city of Malang on October 1, 2022.

Most of those who died were Malang's Arema FC supporters, known as Aremania.

Local media reported on October 24 that the death toll from the stadium tragedy -- one of the worst in the history of the sport -- had climbed to 135.

As anger grew over the police's response to the pitch invasion, the country's police chief announced that six people -- including three police officers -- had been charged with negligence causing death.

Comments from some social media users indicate they believed the false claim.

A combination of reverse-image and keyword searches found the footage was posted on a verified Twitter account of BT Sport, a London-based sports TV channel, on October 2, 2022.

"Shocking scenes in France," the tweet reads. "The Ligue 1 match between Toulouse and Montpellier has been momentarily halted, reportedly due to the release of tear gas on the pitch."

The Ligue 1 match between Toulouse and Montpellier has been momentarily halted, reportedly due to the release of tear gas on the pitch. pic.twitter.com/R6l21tfNgj

Below is a screenshot comparison of the video in the misleading post (left) and the genuine video from BT Sport (right):

AFP reported on October 2, 2022 that the match between hosts Toulouse and Montpellier was suspended for 15 minutes after police used tear gas in the visiting parking lot.

The stand adjoining the parking lot had been evacuated after the visiting fans threw homemade bombs, the report said.

According to the Associated Press, players were sent back to their dressing rooms after the tear gas coming from the stands made it difficult for some to breathe.

French police arrested 15 Montpellier supporters for allegedly causing disorder during the match -- when their team were losing 4-1.

A keyword search found no official reports about a protest over the Indonesian stadium tragedy at a French Ligue 1 match.

AFP has debunked another false claim about the Kanjuruhan stadium tragedy here.