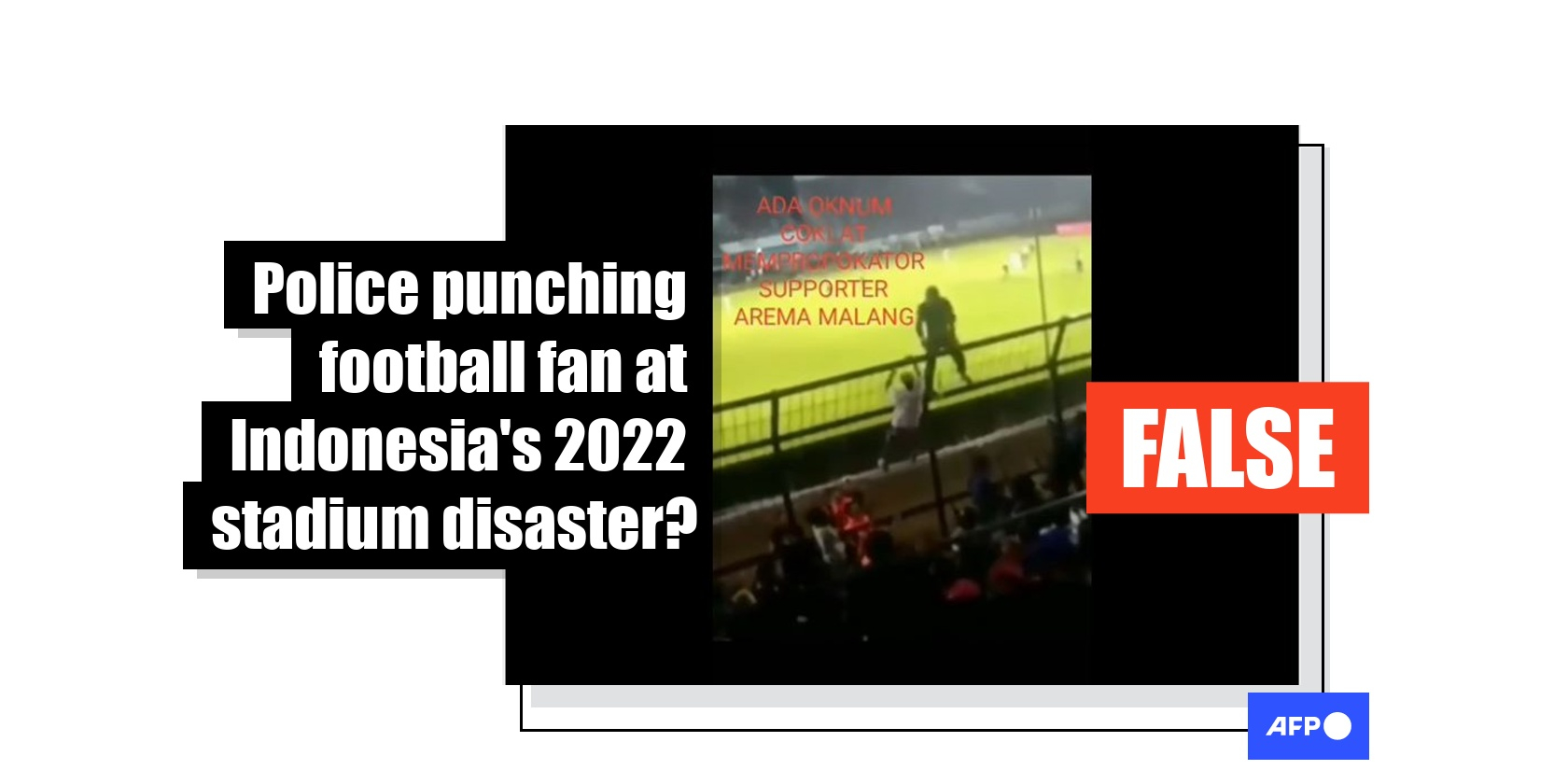 Shortly after 131 people were killed at a football stadium disaster in Indonesia in October 2022, social media posts shared a video that they claimed showed a police officer punching a fan at the ill-fated match. The video attracted hundreds of thousands of views and prompted speculation that the punch triggered the deadly crush. However, the video was filmed in April 2018, when unrest erupted at a match at the same stadium.

"There is a rogue officer in brown provoking Arema Malang supporters," reads the Indonesian-language text superimposed on a video posted on Facebook on October 3, 2022.

In Indonesia, the brown uniform is equated with the country's police force.

The 20-second video, which has more than 394,000 views, shows two people at a fence that separates fans from the pitch. The person on the pitch-side of the fence punches the person climbing up from the fan-side, who falls down.

Chaos then erupts in the stands as spectators begin scathing the fence apparently in a bid to catch the attacker. 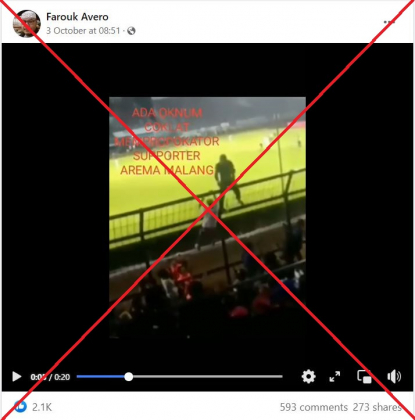 The posts circulated shortly after a human crush killed 131 people at a football stadium in the Indonesian city of Malang on October 1, 2022 -- one of the deadliest disasters in the history of the sport.

Most of people who died were Malang's Arema FC supporters, known as Aremania.

The Indonesian police chief said six people had been charged over the tragedy, as anger grew over the police response to a pitch invasion.

Hundreds of people fled for small exits, resulting in a crush that left many trampled or suffocating to death.

Many social media users believed the claim that circulated with the footage.

"In the eyes of some Indonesian people, police are worthless... embarassing," commented one Facebook user, while another wrote: "Barbaric police".

However, the footage shared on social media was filmed years before the disaster.

A combination of reverse image search and keyword searches found a longer video was uploaded on Facebook page called "Aremania ID", run by fans of Arema FC, on April 20, 2018.

"A video could provide evidence and clarification to the causes of the riot at Kanjuruhan Stadium on April 15, 2018, during a match between Arema FC and Persib Bandung," the Indonesian-language post's caption reads.

"In the first half of the match, a man climbed the fence. It is unclear whether he was one of the supporters or a match steward. He hit an Aremania until he fell off the fence. This of course angered other Aremanias."

Kanjuruhan Stadium in Malang is the same stadium where the 2022 disaster occurred.

Below is a screenshot comparison of the video in the misleading post (left) and the genuine video posted by Aremania ID (right):

Indonesian media outlet Bola Sport included a screenshot of the video in an article about the incident, saying it happened during a football match between Arema FC and Persib Bandung on April 15, 2018.

According to the report, the match ended in a riot and police firing tear gas, causing the death of one Arema supporter.

Local media reported that the person who threw the punch was a match steward.

Bola.com quoted Aremania field coordinator Zaenudin Yusrin who said that the steward "made a mistake"

"The match steward made a mistake," he said. "There was an Aremania who wanted to get onto the pitch and [the match steward] just punched him like that. That triggered a reaction from other Aremanias who stormed the pitch."

A Malang police spokesman confirmed the footage did not show the deadly stampede in 2022.