A video of Malaysia's former prime minister Najib Razak has been viewed hundreds of times in social media posts that claim it shows the jailed politician being detained in a house instead of a prison cell. However, the claim is false. The video was filmed in June 2022 -- two months before Najib began to serve his 12-year jail sentence. The ex-premier -- who was out of jail on bail at that time -- was visiting a house in southern peninsular Malaysia.

"Confirmed that Najib is a kleptocrat staying at Kajang prison officer's house..," reads the Malaysian-language caption of this Facebook post, dated September 7, 2022.

The one-minute video, which shows former Malaysian prime minister Najib Razak walking around a house, has been viewed more than 840 times. 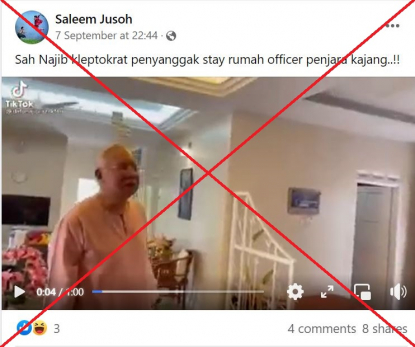 The posts circulated not long after Malaysia's top court upheld Najib's 12-year jail sentence for corruption in the 1MDB financial scandal on August 23, 2022.

He was immediately taken from the Federal Court in Putrajaya to the Kajang Prison.

However, Najib -- who remains a member of parliament after petitioning for a royal pardon -- has requested the Prisons Department in early October 2022 to allow him to visit his constituents and attend parliamentary meetings, Malaysian media reported.

Najib is also suing the government and the Prisons Department after he was barred from parliament.

The video also circulated alongside a similar claim here.

Screenshots of the footage also circulated with a similar claim that Najib is being detained in a house, not a prison cell, on Facebook in English on Facebook, and in Malay on Twitter.

Village visit while on bail

Reverse image and keyword searches found the clip and the images were taken from this video, which was posted on June 17, 2022 -- two months before he was sent to jail -- on Najib's verified Facebook page.

At that time, Najib remained out of prison on bail since December 2021 despite losing an earlier appeal to a lower court.

The video's Malaysian-language caption reads, in part: "This homestay is beautiful. Owned by a settler of Felda Kledang, Ithnin Abdullah."

Felda Kledang is a settlement in Kota Tinggi, a town in the Malaysian state of Johor, more than 270 kilometres (170 miles) south of Selangor, where the Kajang prison is located.

A homestay refers to village houses in Malaysia that are opened to tourists for short vacation stays, similar to a bed and breakfast, according to Malaysia's tourism body.

Below are screenshot comparisons of the video in the misleading post (left) and the genuine video from Najib's Facebook page (right): 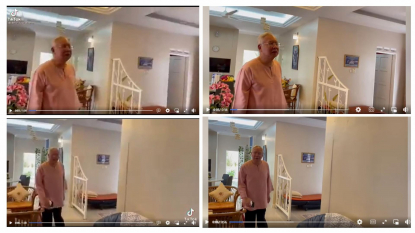 A banana fritter stall in Pengerang, a municipality in Kota Tinggi, which Najib visited, can be seen here on Google Street View.

Below is a screenshot comparison of the photo of Najib at the banana fritter stall he posted on Facebook (left) and the same location on Google Street View (right):

On August 24, 2022, the Prison Department told local English news portal Free Malaysia Today that Najib would not receive any special treatment and that all prisoners will be treated the same.

AFP previously debunked a similar false claim that Najib was being held in a "VIP cell".