A picture of a prison cell has been shared thousands of times in social media posts in Malaysia that insinuate it shows a "VIP prison" that will house the country’s former prime minister Najib Razak. It circulated after Malaysia's top court upheld a prison sentence for the former leader in August 2022. However, the photo actually shows a prison cell in Switzerland and the Malaysian Prison Department told a local news portal that Najib will not be receiving "VIP" treatment.

The picture showing the inside of a "VIP prison" was shared on Facebook here on August 24, 2022.

The Facebook post's Malaysian-language caption translates as: "Auntie was crying last night .I thought she was reminded of the Prophet, but actually it was Najib.

"Remember auntie, VIP prison is comfortable, not like ordinary people's prison. I'm afraid this VIP prison is more comfortable than auntie's house. It's politics, auntie, don't be too obsessed." 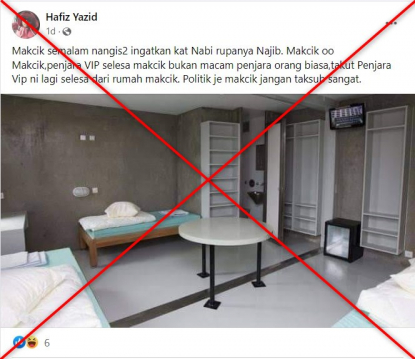 He was immediately taken from the Federal Court in Putrajaya to the Kajang Prison.

The repeated mentions of "auntie" in the post appear to be in reference to groups of Najib's supporters who flocked to the Federal Court on that day.

The same photo has been shared more than 4,700 times after it was uploaded elsewhere in Facebook posts here, here and here; and in tweets here and here that said it showed a "VIP prison".

Comments on the posts suggest some users believed that the photo showed the prison where Najib had been taken.

"Nothing new, expected this to be given to VIPs," one Facebook user commented. "So its kind of like a holiday until the day he will be pardoned...?"

Another user wrote: "It's like a hotel, it's good to be an elite prisoner. Therefore, going to prison again is OK." 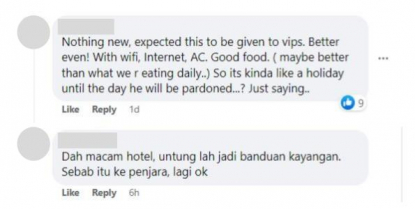 However, the insinuation that Najib would be jailed in a "VIP" prison cell as shown in the picture is false.

Using a reverse image search on TinEye, followed by a keyword search on Google, AFP  was able to trace the original photo to the Swiss news agency Keystone-SDA.

The German-language title of the picture reads: "Switzerland Prison 'Champ-Dollon'".

The photo's French-language caption translates to English as: "View of a cell for three inmates in the prison new annex, during the annex's inaguration, on July 25, 2011, in Thonex, near Geneva".

Below is a screenshot comparison of the photo in the misleading post (left) and the genuine photo from Keystone-SDA (right):

A similar photo can be seen on the Reuters website here.

The Reuters caption also says the photo shows a three-person cell at the Champ-Dollon prison and that it was taken on July 25, 2011.

The Malaysian Prison Department also dismissed the claim on its Facebook page on August 24, 2022.

The post contains a link to the misleading claim, with a caption in Malay that reads: "Stop the spread of fake information."

Videos of Najib's motorcade heading to Kajang Prison were shared on social media and uploaded to the YouTube channel of English news outlet The Star here.

Some of the comments say Najib had already received special treatment as he was still "escorted by police" and taken to prison "in a nice car".

However, the Prison Department told local English news portal Free Malaysia Today that Najib would not receive any special treatment and that all prisoners will be treated the same.