False posts circulate in Myanmar about how egrets produce their young

Multiple Burmese-language blog posts shared thousands of times on Facebook in Myanmar claim that egrets, a type of heron, are all females which "get pregnant" by "enjoying the sound of thunder". This is false. Ornithologists told AFP that there are both male and female birds within the species, and they copulate in order to fertilise eggs.

The post's Burmese-language caption translates to English as: "Egrets do not have males -- they are all females. Then how do they lay eggs?"

The post continues: "The answer to that is that female egrets enjoy the sound of thunder and then get pregnant." 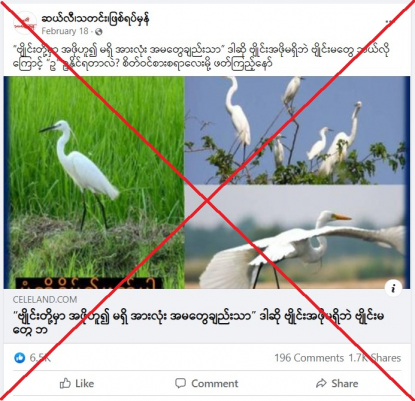 Egrets, a type of heron, are long-legged wading birds.

They inhabit "a wide variety of wetlands" such as lakes, rivers, marshes and estuaries, according to online bird database eBird at the Cornell Lab of Ornithology.

The post also includes a Burmese tale about a princess who apparently got pregnant after she saw a handsome soldier who served her father, the King.

The claim was also shared over 600 times in other Burmese-language blog posts here, here and here.

Ornithologists told AFP that there are both females and males within the egret species that must copulate in order to produce their young.

Sharon Stiteler, a park ranger and bird expert, told AFP: "That claim is not true. Herons and egrets definitely have males and females and they must copulate to fertilise an egg.

"It is possible for birds to lay eggs that have not been fertilised but that egg will never hatch. Herons and egrets mate by having the male perch awkwardly on the female's back and bumping his cloaca on her cloaca."

Mr. Lay Win, a Burmese independent ornithologist and an executive committee member of Myanmar Bird and Nature Society (MBNS), also told AFP that "it is not possible to breed without a female and male for the birds."

"It's very difficult to distinguish males from females for most egrets and herons, unlike other bird species, because they are the same colour and pattern even in their breeding time or season," he said.

"Bird specialists can distinguish males from females only during their breeding time."

Great Egrets grow long plumes during the breeding season to attract attention and their eyes change from yellow to lime green, according to this article by the American Bird Conservancy, a US-based non-profit.

"[They] are seasonally monogamous, remaining with one mate per year," it states. "After pairing up, the male selects a territory, and the couple proceeds to build a flimsy-looking platform nest of stems, sticks, and twigs. The female lays 3-4 eggs, which both parents take turns brooding."