A video has been watched millions of times on Facebook and TikTok alongside the false claim it shows the mythical Garuda bird, which is Indonesia's national emblem. The claim is false. The video has circulated in reports about an Andean condor bird released to the wild in Argentina.

The video -- showing a large bird flying away while a group of watchers cheer it on -- has been viewed more than 203,000 times here on Facebook since it was posted on May 14, 2022.

"It turns out that the Garuda bird is not a mere myth or folktale," the post's Indonesian-language caption partly reads. "The bird rarely makes any appearance.

"But recently a Garuda bird made an appearance in the forest of Mount Penanggungan, East Java province. This broad-winged bird is stunningly beautiful.

"We hope the bird's appearance is a sign that Indonesia remains strong and victorious." 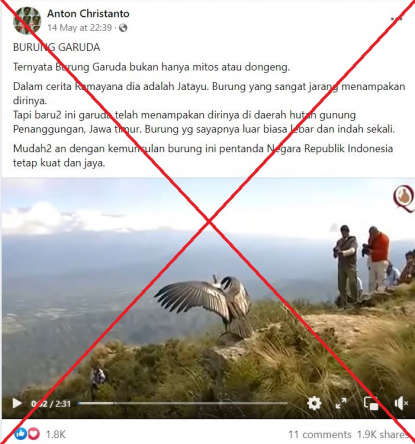 The mythological Garuda bird -- featured in Indonesia's coat of arms -- is depicted as an eagle-like creature with massive golden wings.

The two-minute, 31-second video was also posted with a similar claim on Facebook here, here and here, as well as on TikTok here, where it has been watched more than 4.4 million times.

The Spanish-language headline to the longer footage translates to English as: "The Release of Condor Sayani".

According to the caption, the footage was taken in Catamarca province on March 28, 2014.

The video in the false posts corresponds to the four-minute 31-second mark to the seven-minute 10-second mark of of the longer El Esquiu footage.

El Esquiu published a news report about the Andean condor's release on its website here on March 29, 2014, which included the video.

According to the report, the male condor -- called Sayani -- was found on December 27, 2012 in poor condition that made it unable to fly.

Prior to release, Sayani was cured and fed in the Buenos Aires Zoo in the Argentinian capital, the report adds.

Below is a screenshot comparison between the video in the false post (left) and the genuine footage from El Esquiu (right):

The Andean condor is a bird species found throughout the Andes Mountains in South America and is classified classified "vulnerable" due to killings by humans and deteriorating habitat quality.

The video was also featured in this report about Sayani's release, published on September 7, 2018 on the website of The Dodo, an American media outfit that focuses on stories about animals.