A purported quote from an English-language book by Abu Sadat Mohammad Sayem, a former president of Bangladesh, has been shared hundreds of times in Bengali-language Facebook posts that claim it shows him describing the moment his successor, the late military dictator Ziaur Rahman, forced him to resign. Although the book does contain passages about Rahman, who ruled Bangladesh from 1977 until his assassination in 1981, AFP found the quote had been fabricated. A prominent journalist who translated the book into Bengali told AFP that the Facebook posts had shared a fabricated quote.

The purported quote was shared here on Facebook on May 28, 2022.

It was shared alongside an animated video that includes the same Bengali-language commentary published in the post. 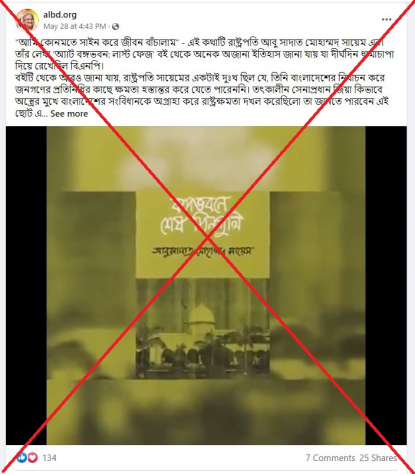 The Facebook post purports to quote the autobiography of Abu Sadat Mohammad Sayem, a former president of Bangladesh who died in 1997, in which he described the moment his successor, the late military dictator Ziaur Rahman, forced him to resign.

The post claims that Sayem wrote in his book, "At Bangabhaban: Last Phase", that Rahman, whose name is shortened to "Zia", held him at gunpoint before he agreed to resign.

The post reads: "Equipped with arms, Zia used to head to [the Bangladeshi president's palace], with his cohorts keeping their weapons raised.

"It occurred to me many times that it was the last night of my life. They wanted me to sign a military decree abolishing the four pillars of the constitution. I kept that decree unsigned."

The purported quote continues: “The next night around 11pm, I woke up to heavy footfalls with boots. Military chief Zia, armed with weapons, made his way to my bedroom.

"Raising his boot-wearing foot onto my bed, he said, 'Sign it.' He had a stick in one hand and a revolver in another. I ran through the document. It was my resignation letter reading, 'I have resigned as the president due to illness.'

"I glanced at Ziaur Rahman. In the meantime, around eight to ten weapon-wielding men had surrounded my bed with their arms raised. Zia put his foot on my bed and then pointed his weapon at my chest, and said, 'Sign it.' My life was just spared by doing so.”

The Facebook post concludes: "'My life was just hanging in the balance until I obliged to sign,' these are the words spoken by former president Abu Sadat Mohammad Sayem. This is a dark chapter of history that BNP kept locked for so long."

While in the office, Rahman founded the Bangladesh Nationalist Party popularly known as BNP in 1978.

The party, which is currently led by his widow, Begum Khaleda Zia, has been in the opposition since 2009, when the ruling Bangladesh Awami League party came to power.

The purported quote has also been shared here, here, here and here on Facebook by some of Bangladesh's top government officials.

The alleged quote was published in local media outlets here, here , here, here, and even the state run news agency after Sajeeb Wazed, the son of Sheikh Hasina, posted it on his verified Facebook page on May 25, 2022.

However, a close analysis of the original book found the purported quote had been fabricated.

The original English-language autobiography published in 1988 contains passages about Rahman but not the exact quotes shared in the Facebook posts.

On page 39 of the book, it reads: “On the 21st day of April, 1977 some senior civilian members of the Council of Advisers, headed by the Special Assistant, approached me with a request to relinquish the office of President. They said that they wanted to serve under Major General Ziaur Rahman, then army Chief and C.M.L.A. Does it not clearly prove that civilians, even though in office, want to serve under the army? Then and there, though tentatively, I agreed to resign."

Below is a screenshot of page 38 and page 39 of the autobiography: 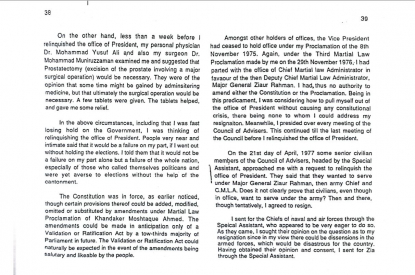 Screenshot of page 38 and page 39 of the autobiography

Mashiul Alam, a prominent journalist and writer, translated the book into Bengali in 1998.

The quote is "fabricated", he told AFP. “I have translated the book from English and found no quote similar to the one spread on Facebook”.

AFP reviewed the autobiography, both in English and Bengali, and found both versions do not contain the purported quote.

"Sayem did not say in his autobiography that he was forced to resign by Zia or anyone at gun point. And we do not find such claim anywhere else too," said Mohiuddin Ahmad, a Bangladeshi writer and political historiographer.

"Actually there was no need for the army to take his resignation at gun point because he was appointed at their will. It was enough for an army to merely ask someone they made president to resign," he told AFP.