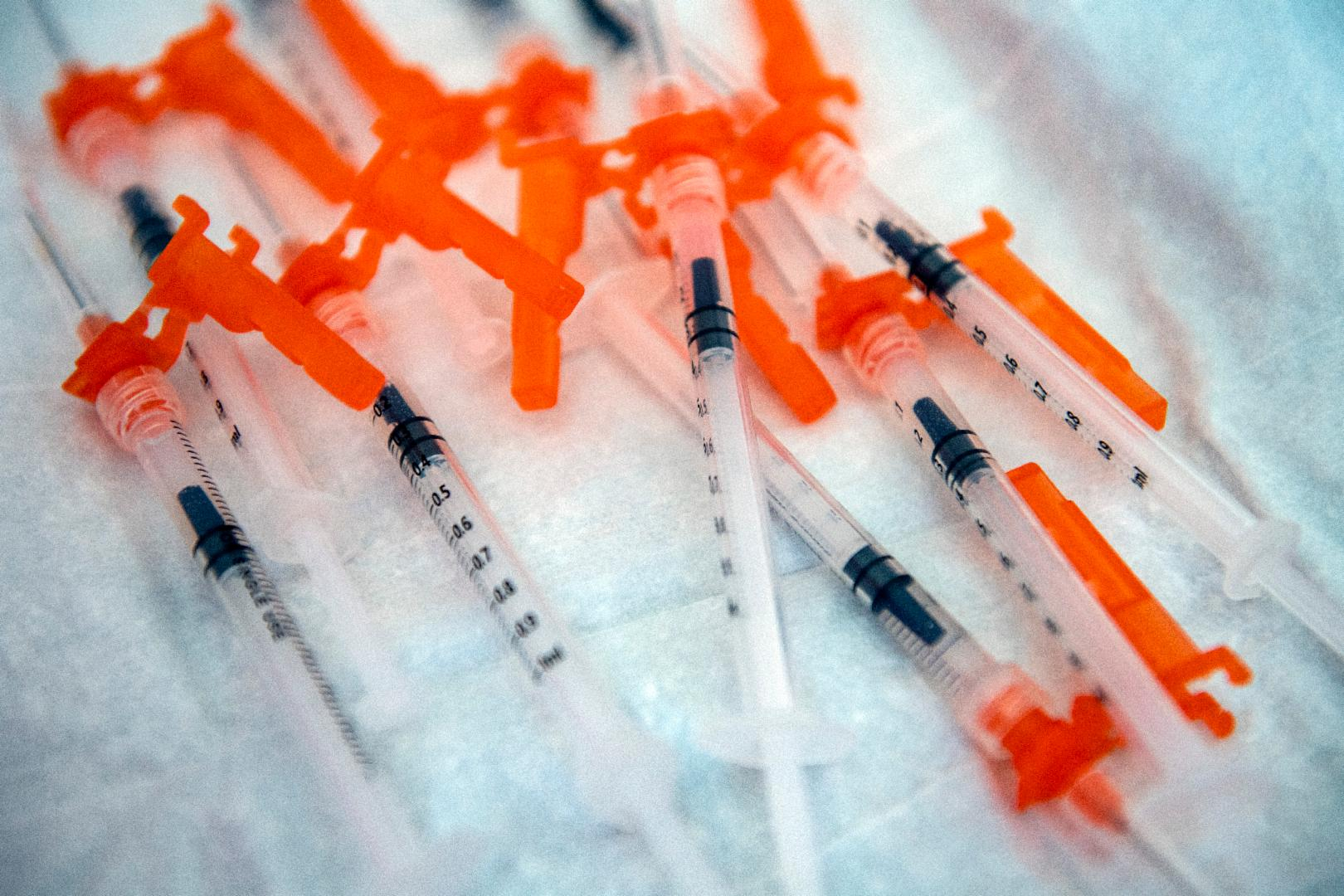 A number of countries around the world have approved a new Omicron-targeted vaccine for use. ( AFP / Joseph Prezioso)

After the US approved Pfizer-BioNTech's new bivalent vaccine that targets strains of the Omicron variant, Facebook users claimed it was only tested using "preliminary data from eight mice". But experts told AFP this ignores important context, as while the new vaccine was approved after tests on mice, it was based on a previous Omicron jab that underwent clinical trials. They said it was an "established approach" for scientists to use trial data for the previous version of the vaccine in order to approve the bivalent vaccine, similar to the procedure for influenza jabs.

The claim was shared in a Facebook post by Martyn Iles, the director of the Australian Christian Lobby, on September 22, 2022.

It has received more than 1,500 "likes" and hundreds of shares.

It reads: "Pfizer's latest BA.4/5 booster has been authorised by the [US Food and Drug Administration]. Following the collection of 'extensive safety and effectiveness data'(their words). How extensive? Preliminary data from 8 mice." 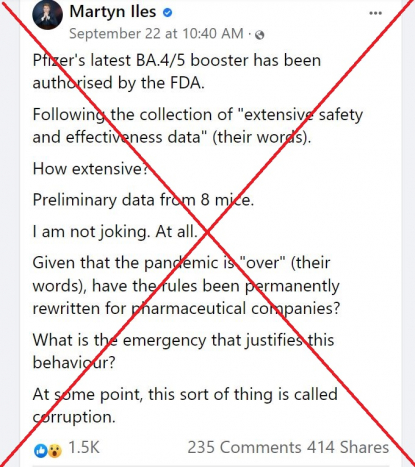 A screenshot of the misleading post, captured on September 26 ( Kate TAN)

Similar claims that the vaccine was approved based on data from the eight mice have been shared thousands of times in Australia, the US, Canada and France.

However, experts told AFP that the posts ignore important context about the way the jab was approved.

Pfizer-BioNTech first tweaked its original vaccine to include the spike protein seen in the BA.1 subvariant, while also still targeting the original strain.

Then the vaccine was further tweaked to include the spike proteins on the BA.4 and BA.5 subvariants.

Experts said the bivalent vaccines designed to target the BA.4 and BA.5 Omicron subvariants were based on older jabs for the BA.1 subvariant that underwent clinical testing.

For Pfizer-BioNTech's bivalent vaccine, three groups of eight mice were injected with three versions of the Covid vaccine. The group that received the bivalent vaccine showed the best immunological response, according to the vaccine makers.

The European Medicines Agency's head of vaccine strategy Marco Cavaleri said data from the trial on the vaccine targeting BA.1 helped understand the effectiveness of the latest bivalent jab given their similarity.

He said at a press conference on September 20 that both vaccines essentially had "the same composition". "What makes them different is that they contain mRNA matching different, but closely related, Omicron subvariants, with a difference in the coding of a few amino acids."

He went on to say applying the findings of one vaccine to another was "an established approach that is respected by science which is based on widely-accepted concepts of immunology".

Claude-Agnès Reynaud, director of research at France's Necker-Enfants Malades Institute, also told AFP that this approach was "logical" and would save time.

"The goal of mRNA vaccines is to be able to adapt to the variants of the virus. By doing a clinical trial, we would have the result in six months. By then, another variant may be there," she said.

A Pfizer spokesperson told AFP that this approach would help provide a high level of protection against current and new Covid variants "so that we can remain vigilant against this evolving virus".

Pfizer's bivalent vaccine was authorised on September 12 by the European Medicines Agency (EMA).

When the vaccine was approved in the US, however, some experts questioned the extent of enhanced efficacy that these updated vaccines might provide, which can only be measured through clinical trials.

"The agencies could have demanded clinical trials, but preferred to go quickly, taking a risky bet for the capital of public confidence if it turned out that these vaccines were less effective than monovalents, which is certainly unlikely but which we have not verified at present", said Antoine Flahault, the University of Geneva's Director for the Institute of Global Health.

Experts have compared the development of the latest Covid bivalent vaccine to the influenza vaccine, which is updated every year to target the prevalent variant.

The WHO holds two conferences each year to make recommendations about the composition of the next season's flu vaccine, scheduled ahead of the winters in the northern and southern hemispheres respectively.

Flahault said that the development of the latest Covid bivalent vaccines used a procedure similar to influenza vaccines.

"The composition of flu vaccines varies from year to year. Manufacturers have neither the time nor the material possibility of evaluating their effectiveness through clinical trials as the flu is seasonal and only produces one wave per cold season," he said.

The importance of data

The European and American drug agencies have noted that their position on bivalent vaccines could be updated after more data becomes available.

All the experts interviewed by AFP also underlined the interest of pharmacovigilance, which makes it possible to collect data on the potential adverse effects of vaccines. "Pharmacovigilance is important, it drives us forward. Today, we are always observing", Claude-Agnès Reynaud noted.

Marco Cavaleri of the EMA also emphasised on September 20 that "it will be important to collect data on the performance of new vaccines in real life, in order to understand how well they protect people against infection and serious diseases in autumn and winter, and the duration of this protection".

AFP previously debunked a similar claim after it circulated in French.