Zimbabwe users spread fake warnings about rattlesnakes in US suburbs

Facebook accounts in Zimbabwe have circulated alarming posts about a rattlesnake purportedly on the loose in various US counties. But the images used in the claims either show unrelated events or stock photos. AFP Fact Check recently debunked a slew of posts, also from Zimbabwe, using similar panic-spreading content about two violent criminals terrorising locals in America.

A Facebook post published in a Delaware yardsale group on August 10, 2022, reads: “A diamond rattlesnake found in Millsboro please be watchful of your surroundings, toilets, openings in pipes, doors etc. Stay safe everyone (sic).”

Another post published on the same day had the same text except for the name of the town, which was changed to Newton county in Georgia.

They feature the same four pictures of snakes and encourage users to “save a life” by spreading the word. 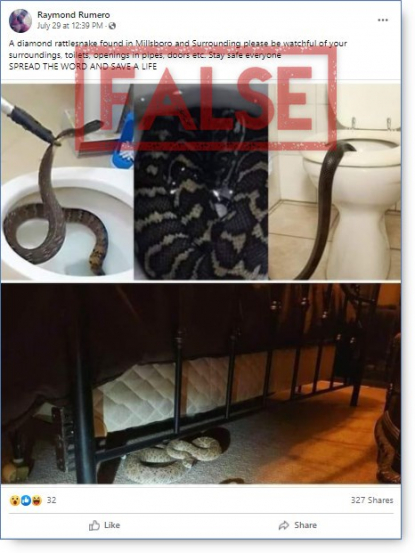 AFP Fact Check found identical versions of the claim posted in a bicycle parts trade group (in Los Angeles) and on another yardsale page (in Hamilton County, Ohio).

Together, the groups boast tens of thousands of members.

Although diamondback rattlesnakes are common in the US (see here and here for more info) – and venomous – the purported warnings on social media are false.

AFP Fact Check conducted reverse image searches to source the pictures and discovered they were either stock photos or from old unrelated sightings.

The first search led to a report about a snake found in a toilet in Khon Kaen, Thailand. A screenshot published with the information was credited to a YouTube channel called “ViralHog”, where a video of the incident was uploaded three days earlier on December 27, 2016.

The second image comes from a Facebook page run by a snake-catcher service in Brisbane, Australia. They published the picture on January 24, 2019, in a post about a woman who was bitten while using her bathroom in the dark. The snake was safely removed.

The third image, taken in 2019 by wildlife and animal photographer Holger Kirk in Hamburg, Germany, can be found on Shutterstock, a website containing thousands of stock photos. 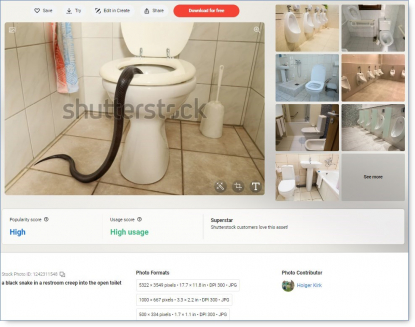 A screenshot of the image on Shutterstock

The fourth image shows a snake found in an apartment in Phoenix, Arizona by Rattlesnake Solutions. It was posted on Facebook on September 1, 2020.

Common traits linked the Facebook accounts responsible for the false posts: they were created in Zimbabwe; they had little or no previous activity; and, in most cases, the comment sections were closed, making it difficult for anyone to warn users that they were being misled.

AFP Fact Check first wrote about this method of spreading disinformation in a debunk published on July 12, 2022, that exposed false posts claiming two violent criminals were terrorising communities in the United States.

One possible motive for the hoaxes is to boost page engagement, as explained in previous debunks (here and here).