Claims of 'IRS army' targeting US taxpayers are misleading

Social media posts and conservative politicians claim sweeping economic legislation provides for a new "army" of 87,000 Internal Revenue Service (IRS) auditors to target all US taxpayers -- creating an agency larger than the Pentagon, State Department, Border Patrol and FBI combined. This is misleading; the comparisons are overstated, only a small number of IRS agents carry weapons, and the planned additional tax enforcement measures are aimed at large companies and higher-income Americans.

"An IRS that’s larger than pentagon, dept of state, fbi, and border patrol combined. Nancy Pelosi and the insane radical dem’s IRS ARMY," says the text of a Facebook post published on August 7, 2022. "Make no mistake they will be weaponized against the American people." 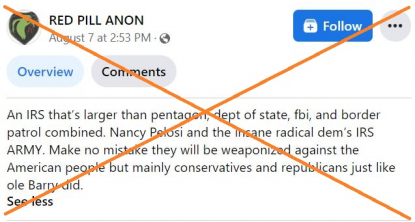 Other versions of the claim have circulated on Facebook, some of which repeat statements from Republican senators Susan Collins and Ted Cruz.

"The Democrats' partisan reconciliation bill would provide the IRS with an additional $80 billion to hire up to 87,000 employees," Collins said in an August 7 statement. 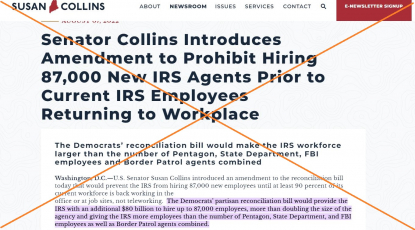 Screenshot of a statement taken August 11, 2022 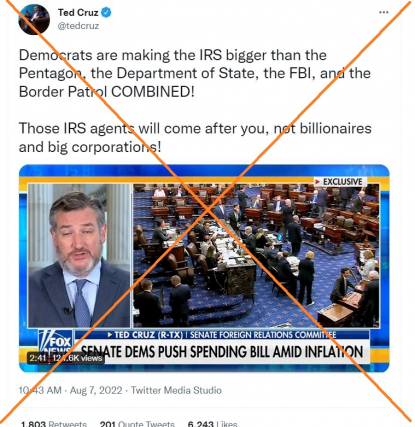 The Inflation Reduction Act (IRA), which Congress has approved and President Joe Biden is expected to sign, would overhaul the IRS by boosting tax compliance staff and upgrading technology. The bill allocates $80 billion to the agency, which could allow for an expansion of its roughly 78,000-strong workforce.

IRS officials have long complained that the agency's processing and enforcement systems are out of date, arguing that an overhaul is needed to ensure all people who should be filing returns do, in fact, do so.

But even with the planned changes, the IRS would not have more employees than four US agencies combined. Claims of armed agents targeting taxpayers are also misleading.

The 87,000 figure cited in the claims comes not from the IRA, but a 2021 estimate of Treasury Department needs. It said the planned increase was meant to occur over a decade, with the IRS head count rising "no more than around 10% annually."

A spokesperson for the department -- which oversees the IRS -- told AFP that, while there are no hard estimates available, many of those new employees would replace more than 50,000 expected to leave or retire in the coming years. In the past, the IRS has had as many as 116,000 positions.

The other four US entities cited in the Facebook post have more combined employees than the IRS:

As for tax enforcement, both the IRS and the Treasury Department have said expanded funding will not take aim at middle-class Americans but instead focus on cracking down on large corporations and taxpayers who earned more than $400,000 annually.

"Specifically, I direct that any additional resources -- including any new personnel or auditors that are hired -- shall not be used to increase the share of small business or households below the $400,000 threshold that are audited relative to historical levels," said Treasury Secretary Janet Yellen in an August 10, 2022 letter to IRS Commissioner Charles Rettig.

Rettig made a similar commitment in an August 4 letter to senators, saying new funding would help modernize IT systems and examine "sophisticated" tax avoidance schemes, often utilized by companies and individuals to reduce or even eliminate their tax liabilities.

A Treasury official said to AFP: "The resources to modernize the IRS will be used to improve taxpayer services -- from answering the phones to improving IT systems -- and to crack down on high-income and corporate tax evaders who cost the American people hundreds of billions of dollars each year. The majority of new employees will replace the standard level of staff departures over the next few years."

Eric Toder, co-director of the Urban-Brookings Tax Policy Center (TPC) at the Urban Institute, added in an email that "only about 31,000 of the 78,000+ current employees of the IRS are engaged in activities related to enforcement and collections."

"Many others are in taxpayer services, return processing, IT modernization, etc.," he said. "So many of the new employees will not be auditors, as there is a need to restore what have become abysmal levels of taxpayer service, as well as to bring enforcement back up to levels that will prevent a wholesale erosion of tax compliance."

Claims of an "IRS army" of gun-toting tax collectors are also misleading.

The agency's Criminal Investigation division has 3,000 employees -- 2,100 of which are special agents who are authorized to carry firearms, according to an IRS spokesperson.

Criminal IRS investigations have resulted in the convictions of a Mexican drug kingpin, a Russian bank founder and the takedown of a darknet marketplace.

AFP has fact-checked other misleading claims about the IRA here.

Daniel Funke contributed to this report.