Skip to main content
US President Joe Biden speaks about the Inflation Reduction Act of 2022 in the State Dining Room of the White House in Washington, DC, on July 28, 2022 ( AFP / MANDEL NGAN)

The Inflation Reduction Act, a slimmed-down version of President Joe Biden's original Build Back Better legislation, includes billions in climate and health care funding. However, the bill's impact is the subject of claims and counterclaims; Republicans say it would increase taxes for those making less than $400,000 annually -- breaking one of Biden's campaign promises -- while Democrats insist it would not. Experts and independent reports say the act contains no direct tax increases on those with incomes below that threshold, but it may indirectly lead to some adverse economic impact in households.

"Guess what? Your taxes are about to go up -- way up, thanks to Joe Biden and a West Virginia senator by the name of Joe Manchin," said Fox News host Sean Hannity during an August 1, 2022 broadcast, which has been shared on Facebook.

Hannity, whose show has millions of viewers, claimed "even families earning less than $200,000 a year" will see higher taxes under the Inflation Reduction Act (IRA). He cited as evidence a July 29, 2022 report from the nonpartisan Joint Committee on Taxation (JCT), a committee of the US Congress that tasks professional economists, lawyers and accountants with conducting legislative research.

That same report inspired claims from conservative politicians and advocacy groups prior to the Senate's passage of the bill on August 7.

"Joe Biden promised he wouldn’t raise taxes on anyone making less than $400,000 and now he’s breaking that promise -- much like every other promise he’s made," the GOP said in an August 5 tweet.

Democratic politicians, activists and commentators have pushed back, claiming that the IRA would not impose higher taxes on lower- and middle-income Americans, who stood to benefit from child tax credits and universal prekindergarten care promised -- and later abandoned -- under Build Back Better. The costs of paying for that plan had been heavily skewed toward wealthier taxpayers.

"When we pass the Inflation Reduction Act, not a single American in the middle class will pay higher taxes," Biden reiterated in an August 3 tweet. "It's that simple." 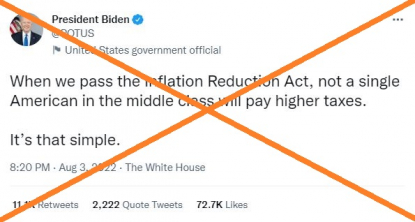 So who is right? Tax experts and independent reports say Biden's claim is technically correct, but some economic fallout for middle-class Americans is possible.

"Biden's statement is correct if you include only changes in individual income taxes," said Eric Toder, co-director of the Urban-Brookings Tax Policy Center (TPC) at the Urban Institute. "However, TPC and other estimating agencies assign some additional burden among individual taxpayers from increases in the corporate income tax."

Tax hikes for the middle class are not listed among the funding sources for the IRA, which was expected to pass the Democrat-controlled House of Representatives, allowing Biden to sign its provisions into law.

The bill's spending on climate change and health care is primarily offset by a 15 percent minimum tax on American corporations whose "book" profits -- income reported to shareholders -- exceed $1 billion. The JCT estimates the provision would affect about 150 companies and increase federal revenues by $313.1 billion from 2023 to 2031.

In its analysis, the committee concluded that the IRA would result in a 1.4 percent federal tax increase for all income levels next year. But those figures do not represent an increase in individual rates.

"There are no direct taxes on people making less than $400,000," said Marc Goldwein, senior vice president and senior policy director at the Committee for a Responsible Federal Budget (CRFB), a group that promotes deficit reduction.

Instead, the numbers in the report stem from "the JCT interpretation that the 15 percent minimum corporate tax would be passed on to people," said Steve Ellis, president of Taxpayers for Common Sense, a federal budget watchdog organization.

Economists have long-debated the extent to which corporate taxes affect workers versus shareholders. The JCT allocates 25 percent of the minimum corporate tax to labor and 75 percent to capital owners. 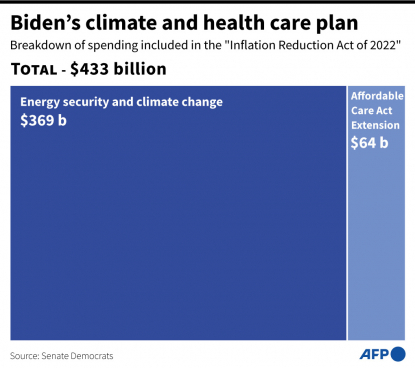 "The labor portion in JCT’s model is relatively small compared to the burden faced by shareholders," said William G. Gale, co-director of the TPC, in an August 2 analysis. "But it’s enough to make the JCT distributional tables reflect tax increases among nearly all income groups in a bill where a corporate tax increase is the primary revenue source."

For example, if corporations are hit with a new minimum tax, middle-class Americans who own stock could see lower returns from their retirement plans and other investments.

"The joint committee's analysis shows that there are a lot of people in the lower income brackets who hold shares, either directly or indirectly, in US companies," said William McBride, vice president of federal tax and economic policy at the right-leaning Tax Foundation.

Toder of TPC added in an email that companies could pass on some of the added costs to workers by reducing hiring and wages. McBride likened that effect to household taxation.

"Even (with) tax burdens that are levied directly on a household -- it could be individual income tax -- the legal incidence is somebody in the household writes the check, right?" he said. "But does it not impact other people in the household?"

The JCT report does not paint a complete picture of the IRA's tax ramifications for middle-class Americans, experts told AFP.

The legislation includes several benefits that may help offset some of the tax burden. Among them are tax credits for green energy, an extension of Affordable Care Act (ACA) subsidies for middle-income Americans, and a decrease in the cost of prescription drugs.

CRFB said in a memo that the "$64 billion on ACA subsidies alone would be more than enough to counter net tax increases below $400,000 in the JCT study." And Goldwein said lower- and middle-income Americans "will end up with higher disposable income on average as a result of the bill."

"The selective presentation by some of the distributional effects of this bill neglects benefits to middle-class families from reducing deficits, from bringing down prescription drug prices and from more affordable energy," the statement says.

But not everyone is assured.

The Tax Foundation's analysis of the IRA's distributional effects, which excludes the bill's drug pricing provisions and its additional funding for Internal Revenue Service (IRS) enforcement, found the legislation would increase after-tax incomes in the short term. But in the long run, incomes would decrease by 0.2 percent, according to the group.

"And that is due mainly to the bill's harm to the economy through the book income tax," McBride said. "It shrinks the economy, it shrinks job opportunities, wages, etc., affecting people fairly evenly all across the income scale."

Toder said the IRA does provide "some tax cuts for lower- and middle-income individuals, mainly through some of the energy provisions." But he cautioned that it is too soon to tell how they will affect incomes in the long run.

"We don't know yet if these tax cuts will be big enough on average to offset for lower income groups any higher burden that results from higher corporate taxes," he said.

AFP has fact-checked other claims about Biden's economic policies here, here and here.