Social media posts claim "middle-class incomes" increased by $6,000 under former president Donald Trump's policies and fell by $6,828 under President Joe Biden because of inflation. But available economic data fail to back the figures, no sources are cited in support of the claims, and wage growth in recent years is not even mentioned.

Screenshots of the message were also shared on Instagram. 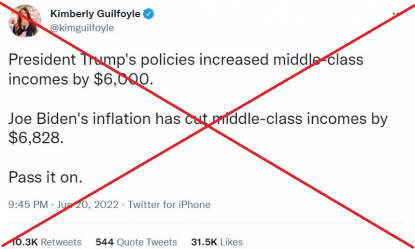 Guilfoyle's post does not specify how the numbers were calculated. However, the best available public data paint a different picture of the average American's income.

It is unclear how the $6,000 figure in the posts was derived, including whether it refers to income growth per capita or per household. The social media posts also do not define the middle class, for which definitions vary widely.

The Organisation for Economic Co-operation and Development (OECD), an intergovernmental organization, defines the middle class as those earning 75 to 200 percent of the median national income. Based on a formula from the Pew Research Center, media have calculated that the US middle class includes those earning from $30,000 to $180,000, depending on family size.

Available economic data showed income gains in the Trump years but less than claimed by Guilfoyle and others.

The posts echo a claim made in 2019 by the Heritage Foundation, a conservative-leaning think tank, which said middle-class families gained some $5,000 under Trump. The ex-president himself claimed the number was $7,000, citing few specifics but touting policies that eased regulations on businesses, a stance he said boosted economic activity.

The Joint Economic Committee of Congress refuted those claims, citing data that showed a $1,400 income gain under Trump -- similar to the trend during the Obama administration. The congressional report also noted that much of the income gains during Trump's presidency occurred in 2017 before his policies went into effect.

To support the $7,000 figure, Trump cited his 2017 tax overhaul, which reduced most tax rates.

An analysis from the nonpartisan Tax Policy Center estimated those changes delivered gains of about $800 in tax savings for most in the middle class. The Washington Post also fact-checked the income claims in 2019 and found them to be misleading.

A screenshot taken June 23, 2022 shows a chart from the Federal Reserve Bank of St. Louis

Drawing upon data from the US Census Bureau, graphs from the Federal Reserve Bank of St. Louis show inflation-adjusted median household incomes on an upward trend starting in 2014, with a boost in 2018 following the Trump-era tax reforms.

It is not clear if the latest claims made online reflect income changes in 2020, when Congress authorized trillions of dollars in stimulus payments to offset the economic effects of the coronavirus pandemic. Real median household income fell by 3.2 percent in 2020, according to the Census Bureau.

The economic ups and downs are reflected in real disposable personal income data -- a separate measure of economic health.

A screenshot taken June 23, 2022 shows a chart from the Federal Reserve Bank of St. Louis

"The numbers for disposable income are erratic, they were inflated by pandemic payments," said Dean Baker, senior economist at the Center for Economic and Policy Research, a think tank in Washington. "No one expected those payments to continue."

Inflation has caused considerable economic pain in 2021 and 2022. But economic data show that, so far, the effect on middle-income households has not been as severe as the social media posts claim.

Wage gains outpaced inflation in 2021 for most families earning between $20,000 and $100,000 annually, according to an analysis by economists at the University of Pennsylvania's Wharton School -- even though costs rose by some $3,500 for the same goods and services from a year earlier.

The Wharton economists noted that despite high inflation, "2021 also produced rapid growth in hourly wages ... with the rise in wage growth concentrated among the lowest-paid 50 percent of workers (the 1st and 2nd quartiles)."

In 2022, inflation has accelerated to a pace of 8.6 percent, affecting Americans' purchasing power. The Conference Board, a non-profit business membership and research association, estimated in April 2022 that purchasing power based on inflation-adjusted incomes was down 3.5 percent from the year prior.

"People had a good year in 2021 with good wage growth which far outpaced inflation," Baker said. "In 2022 it has gone the other way -- inflation has outpaced wage growth."

But he added that a drop in unemployment suggests households may be seeing less impact from inflation "because you have more people working, and more workers per family."

Baker said that, while it is not clear how the $6,828 figure cited in the posts was calculated, a more accurate economic picture comes from comparing 2022 data to 2019 -- before the pandemic and stimulus payments.

Based on data from the US Bureau of Economic Analysis (BEA), inflation-adjusted disposable personal income in aggregate was $15.2 trillion in April 2022 compared with $14.7 trillion in the same month in 2019.

"So it's about three percent higher," Baker said.

A spokesperson for the BEA, which is part of the US Commerce Department, said the agency did not break down this data by income strata.

AFP has fact-checked other claims about the economic achievements of the Trump administration here.