Social media posts claim "Sudden Adult Death Syndrome" is a new condition linked to the Covid-19 vaccine, proving that Sudden Infant Death Syndrome (SIDS) is also a vaccine side effect. This is false; leading health organizations and medical experts say Sudden Arrhythmic Death Syndromes (SADS) -- misnamed in the posts -- is not a new set of heart disorders, and neither SADS nor SIDS has been identified as an adverse event following vaccination.

"For years the majority of people were confused about what caused Sudden Infant Death Syndrome. (Those of us in the natural health world weren't. We've known all along.)" says a November 21, 2021 tweet that includes an emoji of a vaccine. "Now we're seeing Sudden Adult Death Syndrome, maybe the masses will finally put 2 + 2 together."

The tweet has recirculated as a screenshot on Facebook in several countries, including in Canada on June 19, 2022.

But medical experts told AFP that vaccines have not been shown to cause SIDS or SADS.

Health Canada says SIDS is "defined as the sudden death, during sleep, of an infant less than one year of age, which remains unexplained after a thorough case investigation, including the performance of a complete autopsy, an examination of the death scene and a review of the clinical history."

The exact cause of SIDS remains unknown, but the rate of such infant deaths has fallen since Canada began recommending parents place infants on their backs to sleep. Breastfeeding is also associated with a decreased risk of SIDS.

Several other posts say SIDS and SADS are related to vaccination. Such claims are part of a long history of anti-vaccine messaging targeted at parents -- particularly those whose children die suddenly.

But Health Canada says immunization "does not increase the risk of SIDS and may even lower the risk."

This is also the position of the US Centers for Disease Control and Prevention, which says on its website that "studies have found that vaccines do not cause and are not linked to SIDS."

Rachel Moon, chair of the American Association of Pediatrics task force on SIDS, previously told AFP that while there is overlap in the period of high risk for SIDS and frequent vaccinations for babies, "multiple studies have looked at this relationship and found that there is no causal relationship, meaning that it’s a coincidence in timing."

The Canadian Sudden Arrhythmia Death Syndromes Foundation defines SADS as "a variety of cardiac arrhythmia disorders which are often genetic and can be responsible for sudden death in young, apparently healthy people."

These conditions lead to an abnormal heart rhythm, known as arrhythmia. If untreated, it can lead to cardiac arrest and death.

SADS conditions are not new. Cyrus Hadadi, associate director of cardiac arrhythmia research at the MedStar Heart & Vascular Institute in Washington, said the first case was documented in Germany in the 19th century.

Hadadi said that while each case is unique, SADS is genetic, with children facing a 50 percent chance of inheriting the condition from their parents. He also said there is no established link between vaccines and heart arrhythmia.

"There is no evidence that SADS is caused by Covid-19 or Covid-19 vaccination," he said, adding that he had not observed a recent uptick in SADS cases.

Health Canada told AFP in a June 23, 2022 email that it had seen no increase in SADS reports since the Covid-19 vaccine rollout began.

"To date, no reports of SADS following Covid-19 vaccination have been submitted to the Public Health Agency or to Health Canada," Health Canada said. "The benefits of vaccines authorized in Canada continue to outweigh the risks."

The SADS Foundation in the US said it recommends that SADS patients receive the Covid-19 shot.

"There is no evidence suggesting that any of the available Covid-19 vaccines cause people to develop SADS conditions, or make people's SADS conditions more severe," the foundation said in a June 21 statement.

A study published June 23 in The Lancet Infectious Diseases evaluated data from 185 countries and territories and found that Covid-19 vaccines prevented nearly 20 million deaths in the year after they were introduced.

Other social media posts attempt to link SADS to adverse events that have been reported following Covid-19 vaccination.

"Underlying factors for SADS include undiagnosed myocarditis, inflammatory conditions and other conditions that cause irregularities in the electrical system of the heart, thereby triggering cardiac arrest," says a June 20, 2022 Facebook post.

The posts links to the website of Joe Mercola, an osteopathic physician whom the Center for Countering Digital Hate identified as one of the pandemic's top spreaders of anti-vaccine disinformation on social media. 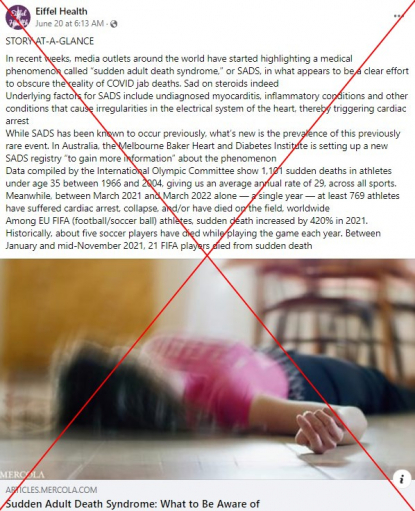 But Jeffrey Hsu, a cardiologist at UCLA Health, said in a June 23 email that myocarditis is different from SADS.

Rare cases of myocarditis and pericarditis -- an inflammation of the outer lining of the heart -- have been reported following Covid-19 vaccination. One US study found the highest risk is among men ages 18-25 in the week following a second dose of a messenger RNA (mRNA) vaccine.

But other studies have found that inflammation is observed more often after a Covid-19 infection than following vaccination.

"There is no evidence that Covid-19 vaccines cause any of the conditions that may lead to SADS," Hsu said.