Vaccination does not cause babies to die in their sleep

Social media posts make a series of inaccurate claims linking childhood vaccination and Sudden Infant Death Syndrome (SIDS). But medical experts say vaccines do not cause babies to suddenly die, and that evidence indicates there are lower rates of SIDS in children who receive the recommended shots.

Medical understanding of SIDS -- a sudden death of a seemingly healthy infant, generally during sleep -- remains incomplete. But the US Centers for Disease Control and Prevention (CDC) and Children's Hospital of Philadelphia say studies show that vaccines do not cause the rare syndrome.

“Everyone knows a family who lost a perfectly healthy baby to SIDS- a mysterious infant death for no medical reason. Now look around you. How many perfectly healthy adults are dying shortly after their vaccine shot. 2+2=?” says the June 13 tweet, in an implied comparison between SIDS deaths and purported fatalities linked to Covid-19 shots. 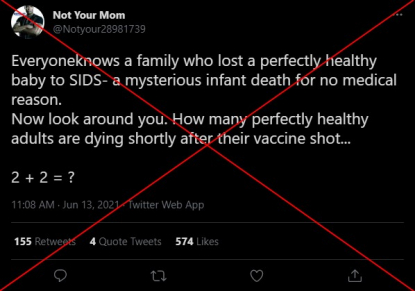 But childhood vaccines and Covid-19 shots are not comparable.

In the US, the vaccine schedule between the ages of two and four months -- when an infant is most at risk for SIDS -- prevents diseases including hepatitis B, diphtheria, tetanus, pertussis and polio.

By contrast, Covid-19 shots protect against the illness caused by the novel coronavirus and are not currently recommended for children under 12 years old.

Mayo Clinic, Children's National and the American Academy of Pediatrics (AAP) say that immunizing babies may be associated with lower risk of SIDS.

Dr Rachel Moon, who chairs the AAP Task Force on SIDS, said that while there is overlap in the period of high risk for SIDS and frequent vaccinations for babies, “multiple studies have looked at this relationship and found that there is no causal relationship, meaning that it’s a coincidence in timing.”

“There is no increased risk of SIDS when you get the vaccines. And actually, the studies suggest that babies who are vaccinated are at lower risk of SIDS. That may be because if you’ve been recently ill, you’re more likely to die from SIDS. Vaccinated babies are less likely to get ill, for multiple reasons,” she added.

Dr Robert Jacobson, a pediatrician at Mayo Clinic, agreed. “If anything, we see lower rates of Sudden Infant Death among infants vaccinated than in infants who have foregone the vaccinations,” he said.

While this reduction may not be directly due to vaccination, "there’s no data that has shown any one of the vaccines actually increases your risk of Sudden Infant Death Syndrome,” he said.

Social media posts that circulated in 2020 claimed that the decline in immunizations brought on by measures aimed at curbing the spread of Covid-19 led to a decrease in SIDS cases.

"One of the many lessons from the pandemic: fewer pediatrician vaccine visits… and a massive decline in children inexplicably dying in their sleep. (SIDS/SUIDS). Related? Yes. Stop pretending otherwise,” said a screenshot of a tweet in a July 20, 2020 Facebook post. A Twitter spokesperson said that the account that shared the message is now suspended from Twitter for “coordinated harmful activity,” which can include spreading medical misinformation.

The head of the CDC’s National Center for Health Statistics (NCHS), Robert Anderson, said that data does not show evidence of a “massive” decline in SIDS or infant mortality in general for the first half of 2020.

In fact, the yearly number of infant deaths attributed to SIDS ending in the second half of 2019 is equal to the amount during the first half of 2020 -- less than 34 per 100,000 live births. 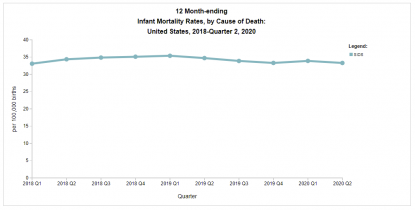 Screenshot of SIDS death data on the National Center for Health Statistics website, taken on July 1, 2021

Anderson noted that the 2020 data may be “slightly underestimated” because “deaths ultimately attributed to SIDS (or similar terminology) tend to be delayed as they typically require a lengthy investigation.”

False claims of a link between childhood vaccines and SIDS long predate Covid-19.

Some social media posts cite a study by Dr William Torch to back the claim that vaccines cause SIDS, but the 1982 study was challenged by researchers, and Torch himself admitted it was difficult to draw definite conclusions from his work. 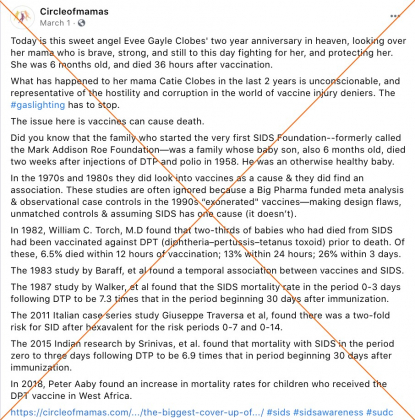 A significant decline in US cases in the 1990s is attributed to the implementation of the “Back-to-Sleep” program, which instructs parents on how to safely put their babies to bed.

Placing infants on their back on a firm surface with no other items, such as toys or blankets, in a room shared with a parent are all ways to reduce risk of SIDS.

Other posts laud Japan for halting vaccinations for children under two in 1994, claiming that the country then experienced a 96 percent drop in infant mortality rate. 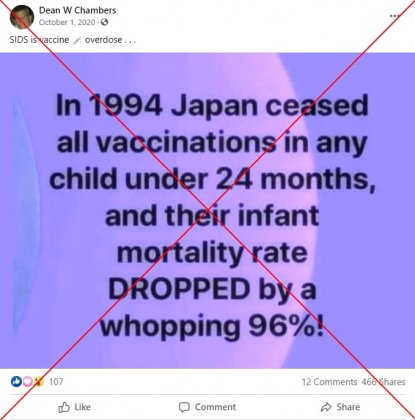 While it is true that children in Japan are particularly healthy by international standards, they are also one of the most vaccinated populations in the world.

The Japanese schedule for vaccines is similar to that of the US, with multiple shots recommended for babies between two and four months.

Japanese law was indeed amended in 1994 to make vaccination more of a civic duty than a strict legal obligation, but in practice, schools ask for children’s vaccination history as they apply.

The law on vaccines stipulates that all citizens “must endeavour to undergo a routine vaccination” against “category A diseases,” such as measles, mumps, rubeola, and tetanus.

Although there are no fines for not vaccinating children, inoculation rates are very high and frequently reach 100 percent of the population for certain diseases, according to the Japanese Health Ministry.

Data showed that SIDS rates in Japan actually took an upturn around 1995 following the law change, but declined in subsequent years.