Skip to main content
The Marine Band performs at a Fourth of July barbecue for military members, government employees and their families at the White House on July 4, 2010 (AFP / Mandel Ngan)

Patriotic house not painted by defiant US Marine

Social media posts claim a house painted in the colors of the American flag is a sign of defiance from its owner, a Marine, after his neighbors took issue with him flying the stars and stripes all year long. This is false; the owner of the Maryland house -- who is a contractor -- says he painted it during a dispute with the local preservation group.

“This Marine was told by his neighbors that he could not fly the American Flag in his yard all year long,” says text in a July 1, 2021 Facebook post below an image of the house. 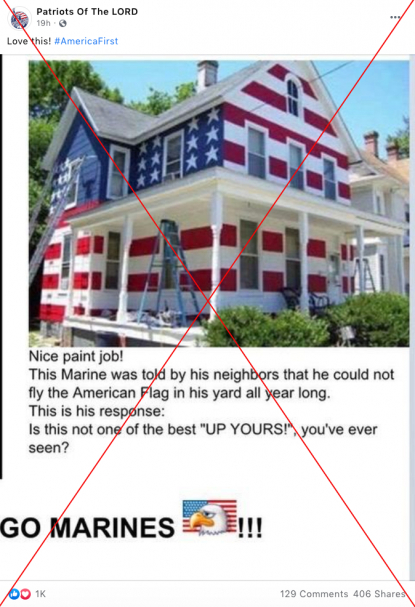 Through a reverse image search, AFP found that the house is located in Cambridge, Maryland, one of the oldest towns in the state. It can be seen on Google Street View here. 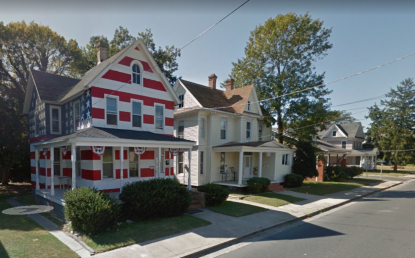 A screenshot of the street view of the patriotic house on Google Maps, dated from October 2013

However, the owner did not paint his house during a dispute with neighbors over flying the American flag, as the social media posts claim.

Branden Spear told AFP he is not a Marine and that “he never had problems with any neighbors on Locust Street,” where the house is located.

The idea of painting the facade in the colors of the American flag came to him after having disagreements with the local historic preservation commission.

The house was in poor condition when he bought it. “I began to replace the ‘existing VINYL windows’ and was told by the commission they had to be replaced with wood windows” for three times the cost, he said.

That is when Spear decided to paint the facade in patriotic colors, displaying 45 stars -- the same number that the American flag displayed the year the house was built.

“I did run into quite a headache with the historic commission and it can still be quite a pain to this day,” he said.

As of early July, the house still displays the stars and stripes of the flag, but Spear said he is hoping to redo the paint in the future.

The false claim has been circulating online for years, according to a search in social media monitoring tool CrowdTangle, and tends to resurface around national holidays.

Examples of older posts can be found here and here.