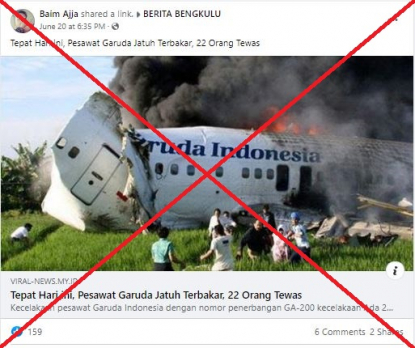 The same photo, featured in links to similar blog posts, was also published on Facebook groups here, here, here and here, with more than 300,000 members in total.

The blog post shared with the false claim describes an air crash incident in the Indonesian city of Yogyakarta on March 7, 2007.

The original photo, which can be seen here on AFP's website, shows people fleeing the wreckage of a plane from the same incident.

Below is a screenshot of the genuine photo on AFP's website: 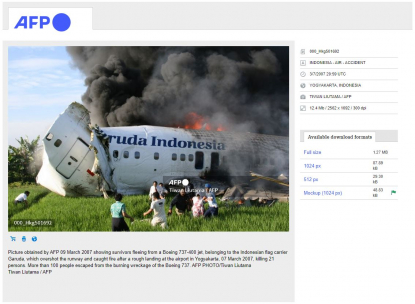 The photo's caption reads: "Picture obtained by AFP 09 March 2007 showing survivors fleeing from a Boeing 737-400 jet, belonging to the Indonesian flag carrier Garuda, which overshot the runway and caught fire after a rough landing at the airport in Yogyakarta, 07 March 2007, killing 21 persons.

"More than 100 people escaped from the burning wreckage of the Boeing 737."

Below is a comparison of the photo in the misleading Facebook post (left) and the AFP photo (right):

AFP reported on the 2007 plane crash here and here, saying that the Indonesian airliner -- which was carrying more than 130 people from the capital city Jakarta to Yogyakarta -- burst into flames after a rough landing.

As of June 24, there have been no reports of an air crash in Indonesia in June 2022.