Multiple social media posts in various languages have shared an image they claim shows Microsoft founder Bill Gates offering a journalist a blank cheque to teach them about the importance of not missing opportunities. According to the Bill & Melinda Gates Foundation, this interaction did not happen. The photo used in the misleading posts shows Gates accepting a gift after appearing on a British TV show in 2016.

It appears to show Bill Gates exchanging an object with a person who is sitting opposite him.

The Korean-language text below the image reads in part: "In an interview, a reporter asked Bill Gates, 'What is the secret to your success?'

"Gates handed her a cheque telling her to write down the amount of money she wanted. The journalist refused and repeated the question in a different wording.

"Gates then tore up the check and told her, 'The secret of my success is that I don’t miss any opportunities like you just missed. If you had this philosophy, you could have become the richest journalist in the world'." 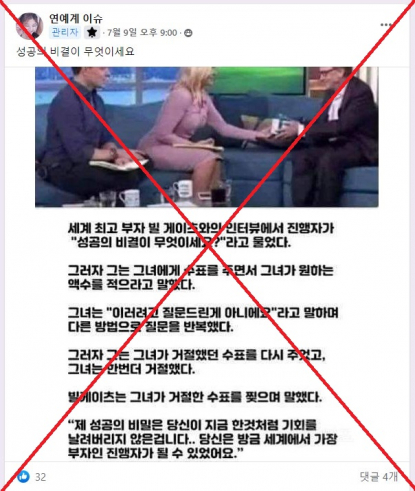 Screenshot of the misleading claim shared on Facebook, captured on August 5, 2022.

Similar posts with the same image and story were also shared in Portuguese, Spanish and Kannada.

This claim has circulated online since at least 2019, and appears in an English-language post on Medium.com by Sylvain Saurel, a developer known for promoting the use of Bitcoin and other cryptocurrencies online.

In the post, Saurel wrote: "Actually, I do not know if this interview really took place or if it's just some kind of urban legend that was launched one day and has grown over time."

A spokesperson for the Bill & Melinda Gates Foundation -- which was started by Gates and his then-wife Melinda -- told AFP on August 2, 2022 that the "claim is false".

A reverse image search on Google found the picture used in the misleading posts was taken from an October 26, 2016 interview with Gates on "This Morning", a show on British broadcaster ITV.

Near the end of the interview, presenter Holly Willoughby handed Gates a "gift that money can't buy" for appearing on the show -- a coffee mug with the show's logo.

Below is a screenshot comparison of the image shared in the misleading social media posts (left) and the original interview on ITV (right):

Screenshot comparison of the image shared in the misleading social media posts (left) and the original interview on ITV (right).

Nowhere in this interview does Gates offer the presenters a blank cheque, or have a conversation that is similar to the story conveyed in the misleading posts.

AFP found no credible interviews or reports about Gates offering a blank cheque to a journalist.

AFP has debunked numerous false claims involving Gates, including claims the Microsoft founder had profited off vaccines and that he had been arrested for various crimes.