Facebook posts widely shared in South Korea claim that the US military has arrested and detained Microsoft founder Bill Gates on various charges, including child trafficking. The claim is false; the US Department of Defense and the Bill & Melinda Gates Foundation said the rumours were not true. Gates has appeared at public events and been active on social media since his alleged arrest.

"I've got happy news for you. Bill Gates has been arrested by the US military," reads a Korean-language Facebook post shared on August 2.

"The US military said on Tuesday that Microsoft founder Bill Gates was arrested for anti-social crimes, child trafficking and other indescribable crimes against the United States and its people." 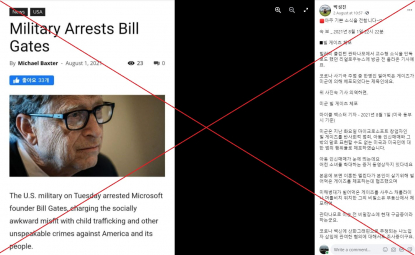 The post features a screenshot of a report by Real Raw News published on August 1.

"The U.S. military on Tuesday arrested Microsoft founder Bill Gates, charging the socially awkward misfit with child trafficking and other unspeakable crimes against America and its people," the article reads.

However, the claim is false -- the US Department of Defense said the reports were baseless.

"That story is a fabrication," a spokesperson told AFP on August 13.

A spokesperson for the Bill & Melinda Gates Foundation also told AFP the claim was "false".

A surge in misinformation around child trafficking has spread on social media in recent years, pushed by the QAnon conspiracy theory movement. Gates has regularly been hit by false claims during the pandemic.

AFP has previously debunked false reports on the purported arrests of other high-profile figures, including US Democrat Adam Schiff, former US president Barack Obama and Speaker of the House Nancy Pelosi.