US Democrat Adam Schiff has not been arrested for 'treason'


Facebook posts shared around the world claim that Adam Schiff, a senior US Democrat who led the impeachment of former president Donald Trump in 2019, has been arrested for "treason". The claim is false: the US Department of Defense and Schiff's office rejected the reports, and the congressman has appeared at public events and on live television since his alleged arrest.

"Adam Schiff has been convicted by the US military court on charges of treason," reads a Korean Facebook post from July 5, 2021. "He is going to be executed on August 13. He has been on trial for receiving 20 million US dollars from China and rigging the latest US election". 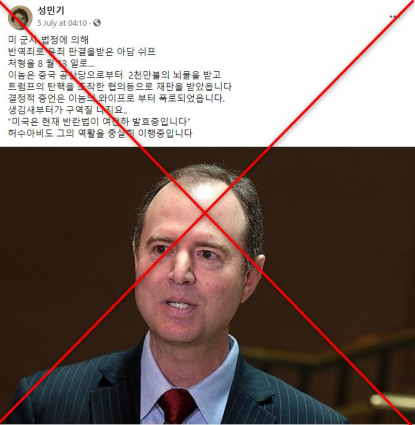 The post refers to baseless allegations of widespread fraud in the 2020 presidential election that AFP has repeatedly debunked.

Similar Facebook posts circulating in the United States and South Korea claim Schiff was arrested in connection with a "Chinese-sponsored plot aimed at impeaching the most patriotic president to have ever sat in the Oval Office".

Schiff led the historic impeachment against Trump in December 2019 over his attempts to push Ukraine into opening a probe into rival Joe Biden.

However, the claim is false; Schiff has not been arrested for "treason".

A spokesperson at the US Department of Defense told AFP the reports were "not true".

"This story is completely false and without basis in reality," a spokesperson told AFP on July 14.

Since his alleged arrest, the Democrat has made various public appearances, including a live July 7 interview with CNN and a visit to a school in Virginia on July 14.