US police have urged residents in small towns and rural communities to ignore Facebook posts warning people to be on the lookout for two armed and dangerous men. Shared thousands of times, the posts include mugshots of individuals who allegedly pretend to be homeless while they prowl neighbourhoods and launch attacks. Some versions contain different images but the claims are all strikingly similar. They are also false. The men seen in the pictures were previously linked to past and unrelated crimes. US authorities assured the public there is no truth to the claims. AFP Fact Check found the posts emanated from Facebook accounts created in Zimbabwe and Botswana.

“These 2 men go around claiming to be homeless, seeking help, then they attack you,” the captions read. “They are on the run and they are very dangerous. They attacked a 33 year old single mom with a knife 2 days ago leaving her struggling for her life. If you see them please report to the police and be careful. Warn others (sic).” 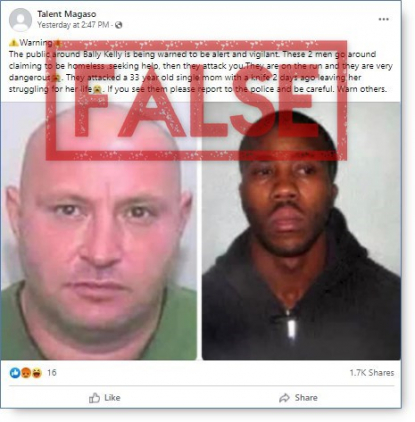 One post appeared on a page offering “stuff for sale” in Tama Toledo, a town in Iowa, US. The same “warning” was posted on a page called “BUY SELL SWAP” in Ballykelly, a village in Northern Ireland.

AFP Fact Check also found a similar version of the claim posted to a yardsale group (in Auburn, Alabama) and on an auction page (in Kitsap, Washington).

But the claims about the two men are false.

AFP Fact Check detected a pattern to the posts after US journalist Brandon Alter wrote a story about local officials in Williamsburg County warning people against a false Facebook post claiming that a “mentally ill” and “very dangerous” man had gone missing in the community.

“Please note, Williamsburg County Sheriff's Office has not received any information in reference to the male being reported missing,” the sheriff's office said in a statement on Facebook on June 24, 2022. 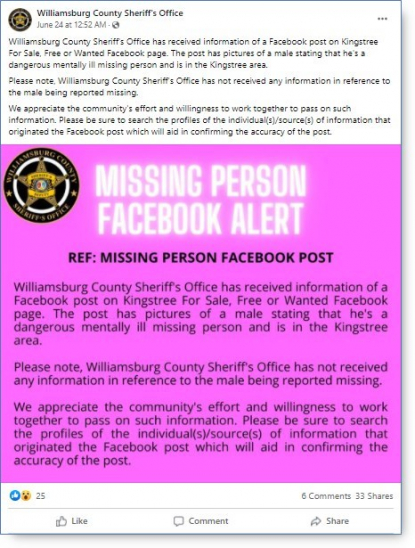 A screenshot of the Williamsburg Country Sheriff's statement, taken on July 1, 2022

The post was deleted but shortly afterwards after a fresh one – also false – appeared online, this time with images of two men alleged to be violent criminals in Kingstree.

“Less than 20 minutes after The News shared the story in the Facebook group, another fake post has been made,” Alter wrote in a Twitter thread. “This one about people who committed a violent crime. The person who made this post lives in Zimbabwe, according to their profile.” 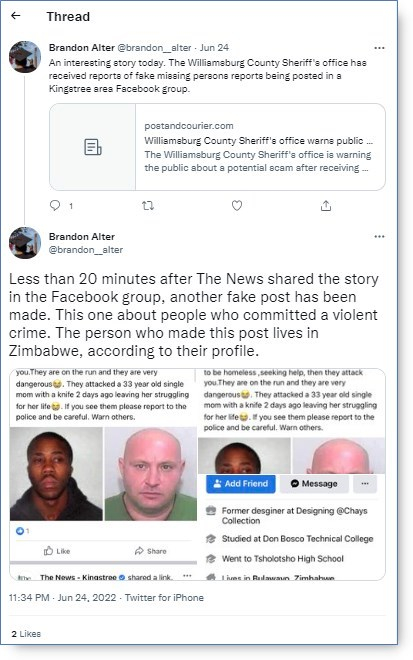 A screenshot of the thread by Brandon Atler, taken on July 1, 2022

AFP Fact Check searched Facebook using keywords in the post and found that it had been replicated and published with the same images in several Facebook groups — and that most of the account holders were based in Zimbabwe.

Similar claims but with three different images were also published on Facebook (here and here). 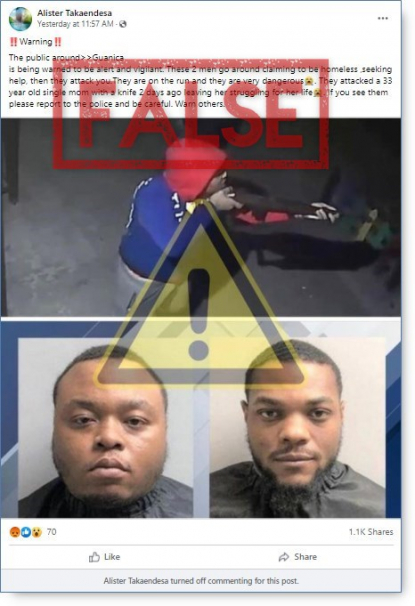 A screenshot of a false post containing unrelated three images, taken on June 29, 2022

Like the other posts, only the names of the communities purported to be under attack – Puerto Rico and Waco, Texas in the examples above – have been changed.

The identical narrative was used in yet another false post, aimed at residents in Butler, Pennsylvania. But on this occasion, it was published with what looks like a CCTV image of two men standing in the forecourt of a petrol station. 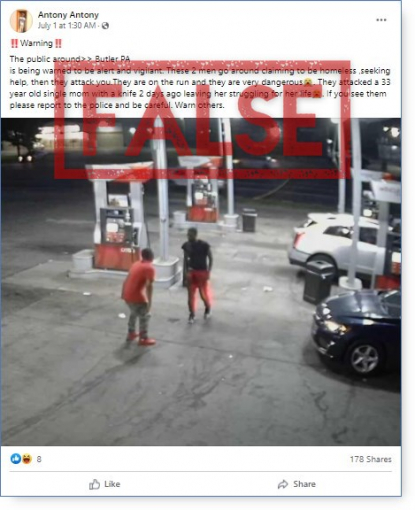 A reverse image search found that the two individuals were allegedly involved in a shootout in Memphis, Tennessee, (and not Butler, Pennsylvania) on June 23, 2022.

At the time of the reports, police were offering a reward of up to $2,000 for information that could lead to an arrest.

Whose mug is it anyway?

Further image searches revealed the identities of the other men in the various posts.

One is Patrick Kosolo who was featured in articles in December 2014 when the UK’s Metropolitan Police issued a list of 12 of their “most wanted” suspects.

Kosolo was wanted in Enfield, a London borough, in connection with a case of grievous bodily harm. 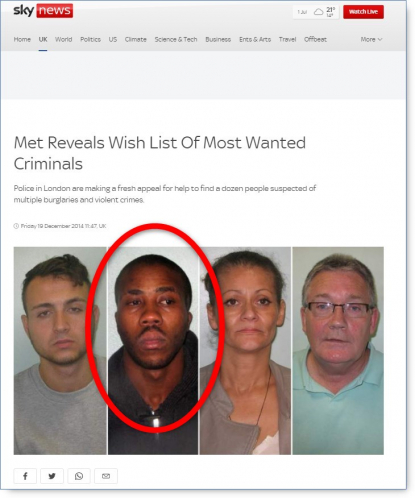 A screenshot highlighting Kosolo in the Sky News article on December 19, 2014

Kosolo’s purported accomplice according to the claims is, in fact, Turkish national Ozgur Demir, who remains on the National Crime Agency’s wanted list in the UK for alleged drug trafficking. 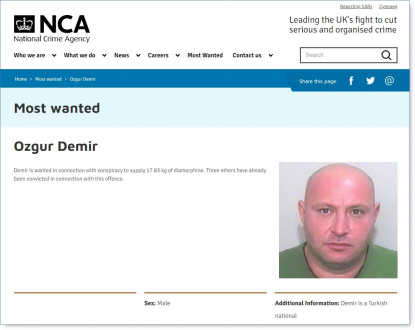 The second set of photos associated with the claims feature two men who were charged with murder in April 2021 over a possible drug transaction in North Dakota, US. 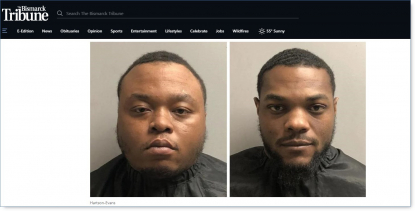 A screenshot of the article by the Bismarck Tribune

Their trial in March 2022 ended in a hung jury. A retrial could take place at the earliest in late July, attorneys in the case were told by the judge.

Lastly, the person seen wearing a hoodie while pointing a firearm at a target out of frame was the second suspect arrested – in February 2021 – for the fatal shooting of an innocent bystander as he walked his dog in Manhattan two years earlier. 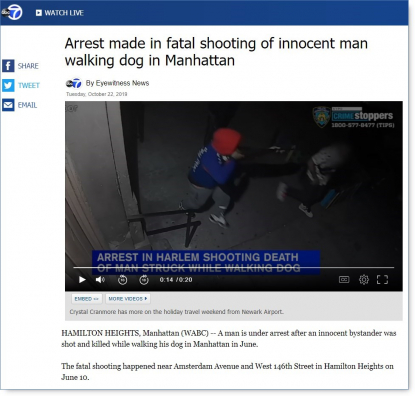 By the end of June, the sheer scale of false posts flooding Facebook had prompted police departments across America to issue statements dispelling the claims while also reassuring residents of their safety (see here and here).

“These posts claiming you should feel scared or frightened that an attack by the men pictured in them are utterly false and entirely fabricated," Oklahoma’s Enid Police Department said in a statement. 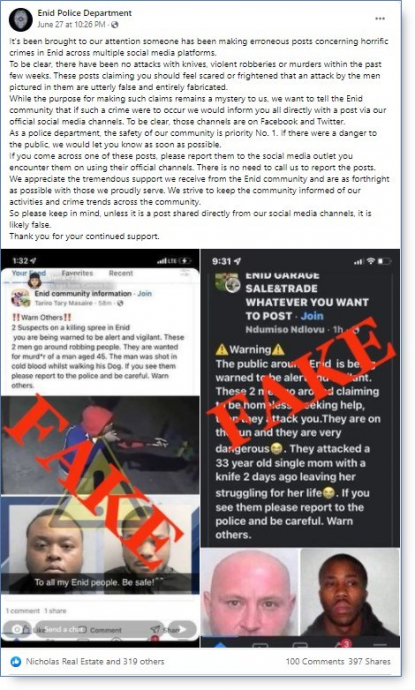 A screenshot of the Facebook statement by Enid Police Department, taken on July 1, 2022

Common traits linked the Facebook accounts responsible for the slew of false posts: they were created either in Zimbabwe or Botswana; they had little previous activity; and, in most cases, the comment sections were closed, making it difficult for anyone to warn users that they were being misled.

One possible motive for the hoaxes is to boost page engagement, as explained by AFP Fact Check in previous debunks (here and here).

More and more newsrooms in the US have stopped publishing police booking photos, according to the US non-profit The Marshall Project, which argues that the pictures can disproportionately impact Black people and mark someone for life without proof of guilt.