Skip to main content
A worker cleans the doors of a train using disinfectant spray at Pretoria Station as the Passenger Rail Agency of South Africa (PRASA) resumes its operations in Pretoria on July 1, 2020. ( AFP / PHILL MAGAKOE)

Multiple posts on Facebook allege that the Passenger Rail Agency of South Africa (PRASA) is hiring people to fix its railway lines from Johannesburg to Soweto. But PRASA has confirmed the claim is false, saying that all vacancies are advertised exclusively on its official websites. South Africa is fertile ground for online job scams as the country grapples with spiralling unemployment. This latest hoax even prompted candidates to spontaneously show up at PRASA's premises, according to the agency.

A screenshot of one of the false Facebook posts, taken on June 14, 2022

Comments below the post indicate that people believe the jobs are legitimate, with some asking for more information about the available positions, including contact details. 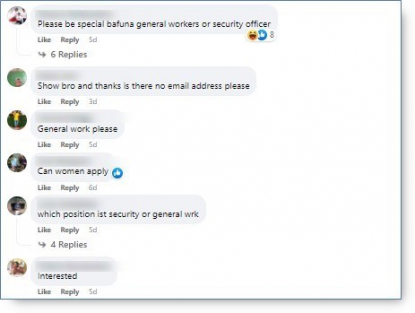 A screenshot of the comments in one of the false Facebook posts, taken on June 14, 2022

Parastatal PRASA has been plagued by numerous scandals in recent years. In 2015, its chairman admitted that 70 new trains imported from Spain did not fit the tracks in South Africa – a blunder that cost R600 million ($37 million).

A tender for the maintenance of the trains was extended multiple times in 2019 after years of no servicing. On March 22, 2022, Minister of Transport, Fikile Mbalula said that it will cost PRASA about R4 billion to repair damaged infrastructure as a result of vandalism.

Some train lines reopened in 2020 and 2021, however, financially strained commuters are still facing months of repairs to some of the railway infrastructure.

The agency rejected the job post claims on June 9, 2022, saying that applying for the “convincing” advert would be a “wasted effort”.

“PRASA advertises its vacancies or careers on its website, social media and newspapers,” the agency tweeted. 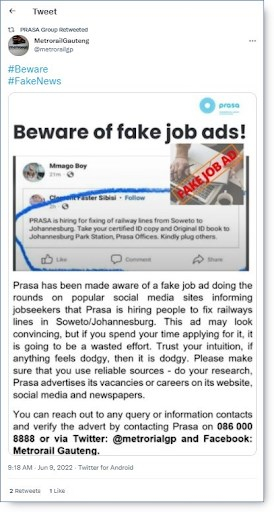 A screenshot of the statement on Twitter, taken on June 15, 2022

PRASA told AFP Fact Check they had been inundated with enquiries since the start of the month, with up to 50 people arriving physically with their CVs or calling based on the Facebook posts.

South Africa is fertile ground for job scams – more than a third of the country’s labour force is unemployed.

Digital verification organisations Africa Check and DFRLab published a report on May 26, 2020, describing how scammers use Facebook to prey on the unemployed to make money.