Two pictures have been shared on Facebook alongside a claim that they show Kenyan presidential candidate William Ruto ignoring fellow politician Aisha Jumwa’s plea to speak at a political gathering. Jumwa is running for governor of Kilifi as a member of Ruto's alliance. However, the claim is false: video footage of the rally shows Ruto acknowledging Jumwa and encouraging those in attendance to vote for her in next month’s general elections.

“Dear William Ruto, this is a woman, a leader, a gubernatorial candidate by the name Aisha Jumwa vying under UDA … why is she begging to speak at your rallies?” reads part of the post, which has been shared more than 70 times since it was published on Facebook on May 25, 2022. 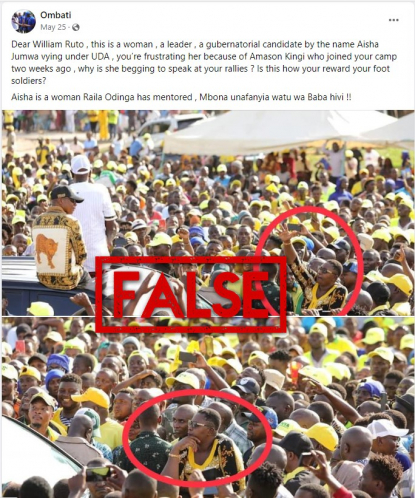 Two images included in the post show Jumwa wearing spectacles, and circled in red, standing in a crowd. In one picture, her right hand is raised.

Jumwa was once an ally of Ruto’s main election opponent, Raila Odinga. So, too, was Amason Kingi, the current governor of Kilifi seen seated alongside Ruto in one of the images.

Both Jumwa and Kingi are now in Ruto’s camp.

The post claims Ruto snubbed Jumwa because of her previous association with Odinga and his favouritism toward Kingi.

But a video from the event shows the claim is false.

A reverse image search revealed the pictures are actually screenshots of footage taken at a Ruto alliance rally in Malindi in May 2022.

Video of the event uploaded to YouTube by TV47 shows Ruto acknowledging Jumwa and endorsing her bid to become the next governor of Kilifi county.

Ruto, speaking in Swahili, says: “This woman Aisha Jumwa wants to be the next governor of Kilifi county and is asking for your votes. Will you give it to her? Is she equal to the task or not?”

People respond by raising their hands in agreement. Jumwa waves back to the crowd and Ruto.

Kingi, meanwhile, is not seeking re-election as governor, nor has he indicated an interest in vying for another elected position.

His party, the PAA, has sponsored several candidates in Kilifi and other counties in Kenya’s coastal region.

False information on social media has surged ahead of the August 9 polls. AFP Fact Check has debunked various claims (here, here and here).