Whispers that Kenyan election officials colluded with a politician to award a controversial ballot printing deal have surfaced just a month before national polls open in August. Amid the rumours, multiple Facebook posts shared an image of a purported newspaper front page with a headline claiming commissioners in charge of the electoral body were investigated by Interpol and found guilty of receiving $3 million (KSh 354 million) in kickbacks to influence the tender for printing ballot papers. The headline, however, was fabricated. AFP Fact Check confirmed the original front page was digitally altered while Interpol also scotched the claim, saying they have no mandate to act as investigators. The front page appears to be a genuine copy of the July 7, 2022, edition of The Star, one of Kenya’s top daily newspapers.

The caption in the post asks if IEBC head Wafula Chebukati can be trusted with overseeing free and fair elections.

Posts sharing the same front page have also been published elsewhere (including here, here and here) on Facebook.

Chebukati has denied allegations that he held a series of meetings with a politician to influence a tender awarded to a Greek company, Inform Lykos, to print ballot papers.

His commission has also been flagged for a number of alleged irregularities ahead of the election scheduled for August 9, 2022.

However, the headline seen in the Facebook posts is fabricated.

A keyword search found that the original front page on July 7, 2022, was digitally manipulated.

The real headline above the lead story read: “Why IEBC chiefs are under siege”. 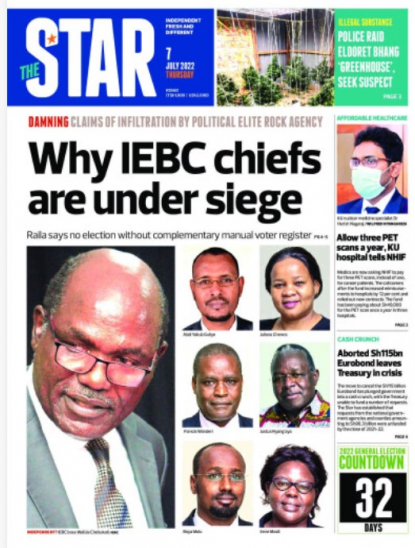 The authentic front page of the Star newspaper’s July 7, 2022, edition

The story made no mention of million-dollar bribes to Chebukati but rather spoke about “damning claims of infiltration by political elite”, according to a strap above the headline.

The Star’s editors issued a brief statement of denial on Twitter.

“FAKE NEWS ALERT: This is not the true version of our July 7, 2022, cover page. Treat it as FAKE,” the newspaper tweeted.

A general search on the newspaper's website and social media pages (here and here) also yielded no results of an article matching the false headline.

Interpol, meanwhile, denied it was involved in a bribery investigation linked to Chebukati.

AFP Fact Check has already debunked several election-related claims in Kenya, including this one on doctored newspaper front pages.