Skip to main content
Muslim worshippers perform the first evening Tarawih prayer on the first night of the holy fasting month of Ramadan at the Baiturrahman grand mosque in Banda Aceh on April 2, 2022. ( AFP / Chaideer Mahyuddin)

Multiple Facebook posts in Muslim-majority Indonesia have shared two screenshots of purported local news headlines that claim a "new prayer direction will be developed in China" and allege that China will fund the project. However, the screenshots have been altered from unrelated news reports.

A composite image of two screenshots were shared here on Facebook on March 29, 2022.

One screenshot purportedly shows a report from Indonesian media outlet Sindonews, headlined: "Religious Affairs Minister Yaqut: I can confirm development of new QIBLA for all followers of Islam Nusantara will commence soon and we have collaborated with the Chinese government. The development site is located in China."

The second screenshot appears to show a report from another Indonesian news site Detikcom, with a headline: "Xi Jinping: China is ready to fund all expenditure for the development of the new Qibla for followers of Islam Nusantara."

Translated to Indonesian to English, the post's caption translates as: "ISLAM NUSANTARA HAS A NEW QIBLA...!" 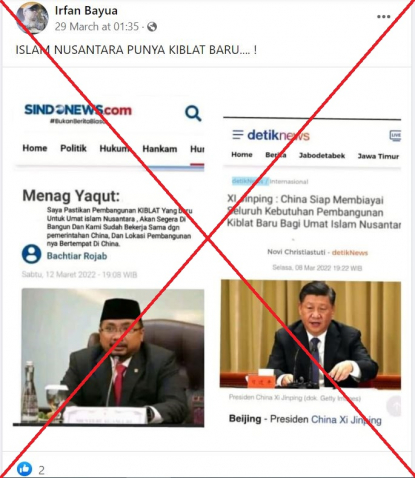 "Qibla" refers to the direction of Kaaba, the sacred shrine in the holy Saudi city of Mecca, which Muslims face during prayers.

Islam Nusantara, which translates as "Islam of the Archipelago", has been promoted by both Indonesian President Joko "Jokowi" Widodo and the country's largest Muslim organisation, Nahdlatul Ulama, as a brand of Islam that maintains the country's traditional culture and practices.

In March 2022, Yaqut faced criticism from hard-line Muslim groups after he issued a circular about regulating the use of loudspeakers at Indonesian mosques.

China is Indonesia's top trading partner and has invested in numerous projects in the Southeast Asian nation, from a high-speed train line to mining plants.

Jokowi's administration is often seen as being "too friendly to Beijing" as many Indonesians continue to distrust China, partly due to the intrusion of Chinese coast guard and fishing vessels into Indonesian waters and the employment of foreign Chinese workers.

The same pictures were also shared with a similar claim on Facebook here, here, here and here.

Translated from Indonesian, one comment says: "Communists are clearly our enemy, they dare to make a qibla."

"The qibla is money probably," says another.

However, Google reverse image searches found the screenshots are edited images of genuine articles that are unrelated to the claim.

The original news article has the same reporter's byline and was published on the same date and time as the purported report in the misleading post.

Below is a screenshot comparison between the first misleading picture (L) and the genuine Sindonews report (L): 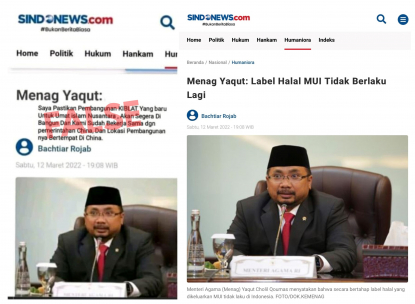 It features the same photo of Xi, the same reporter's byline and the same publishing date and time as the ones seen in the second misleading picture.

However, the genuine Detikcom article is headlined: "Chinese President Says Latest Situation in Ukraine Is Concerning."

Below is a screenshot comparison between the second misleading picture (L) and the genuine Detikcom report (R): 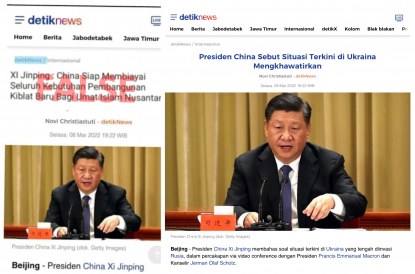 Online searches found both Sindonews and Detikcom have never published any report on the purported topic.

The suspicion on China's influnce in Indonesia has triggered various false and misleading claims — some of AFP's debunks can be read here, here, here and here.