A post shared on Facebook in Ethiopia claims that Addis Ababa University’s Yared School of Music will be demolished to pave way for the expansion of the Oromia Supreme Court. The claim is misleading; the court’s complex, located adjacent to the music school, is undergoing an expansion, but there have been no announcements about any plans to destroy the music school nor to encroach on its grounds. Both the court and the university dismissed the claim.

Written in Amharic, it translates to: "Breaking news: The famous Yared Music School (YMS) will be demolished as the Oromia Court, located in 6 Kilo, plans to expand. For this construction, land was taken from YMS on the road from 6 Kilo to Menelik hospital for the Oromia court." 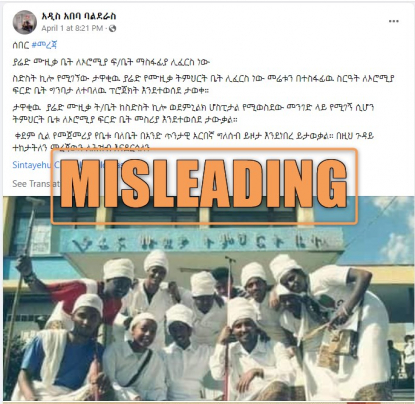 The Oromia Supreme Court is the highest court in Ethiopia's Oromia region.

Established over 70 years ago, Addis Ababa University’s Yared School of Music has made significant contributions to Ethiopia’s music industry.

The two institutions are located adjacent to each other in Addis Ababa. 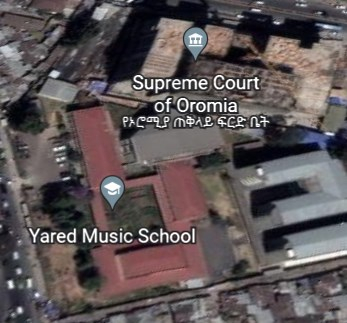 But the claim that the historic Yared Music School will be flattened to accommodate the court’s growth is misleading.

“I’ve seen several posts making the claim on social media, especially on Facebook. While it is true that the Oromia Supreme Court is expanding its complex which is located on the northwestern part of Saint Yared Music School, there are no plans to expand or request to extend our complex into the school,” Gonfa Atoma, a spokesman for the Oromia Supreme Court, told AFP Fact Check.

He added that the approximately 6,200 square metre expansion is being built on land that already belongs to the court.

“The information that is spreading on social media about the demolition of Yared Music School, one of the constituent schools within Addis Ababa University, to create room for the expansion of the Oromia Supreme Court is not true,” reads part of the university's statement, posted in Amharic on April 3, 2022.

Moreover, AFP Fact Check found no publicly available plans or proposals about any expansion onto the music school's grounds.