"A CNG gas station pump in Rohini sector-11 in Delhi exploded and then caught fire. No information about any casualty or harm," reads a Hindi-language Facebook post from March 29.

The video -- viewed more than 4,000 times -- shows a huge cloud of smoke billowing from a building engulfed in flames.

Rohini is an area located in north Delhi, while CNG (compressed natural gas) is a cleaner alternative to gasoline that is increasingly popular with Indian motorists, Nikkei Asia reported. 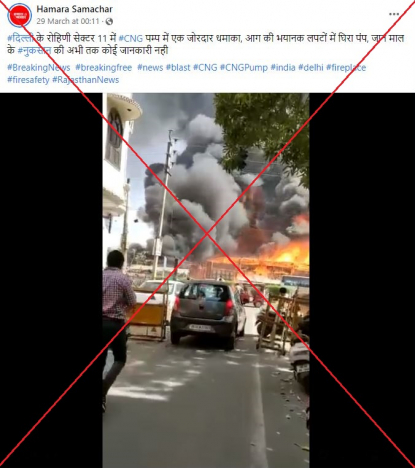 While the footage genuinely shows a blaze in Rohini, it was not a gas station that caught fire.

Local media including Hindustan Times and DNA reported that a fire broke out in a banquet hall and its tent -- called a pandal -- near the gas station on March 24.

An NDTV video report on YouTube shows the pandal ablaze. It says nobody was in the venue during the fire and no casualties were reported.

ANI news agency reported that the cause of the blaze was not immediately known.

Delhi police tweeted that the fire broke out at a pandal and that no casualties were reported.

A video being spread on social media, of fire at a CNG pump in Rohini, is factually incorrect. Incident of fire took place on 24th Mar at a pandal wherein no casualties were reported.#DelhiPolice acted promptly to help contain the situation. @dcprohinidelhi#DelhiPoliceUpdatespic.twitter.com/0MKJaNXFPE

A spokesman for Golden Pandal told AFP it was his venue that was affected by the fire.

He said the gas station was unaffected by the blaze.

"We think a short-circuit caused the fire. This is very common in summers in the Delhi area," he said.

The official added the fire could also have been caused by a cigarette stub but did not suspect foul play.