Skip to main content
A diver swims near coral on the Great Barrier Reef, off the coast of the Australian state of Queensland ( AFP / Glenn Nicholls)

An online article claims a major international report on climate change found little to no evidence that global warming causes adverse events or has a negative impact on the environment. But the report shows that there has been a clear intensification of the planet's warming and the toll it has taken on humans and ecosystems.

"The Climate Scaremongers: It's Worse Than We Thought!" say the headline of a March 11, 2022 article on the Climate Change Dispatch website about the report from the United Nations Intergovernmental Panel on Climate Change (IPCC).

The report "found very little evidence that our climate was any worse than in the past," the article says.

"We are told that human-induced climate change is causing severe loss and damage to human and natural systems because of the 'increased frequency and intensity of extreme weather events'. This is all very strange, given that last year's report found no evidence that this was the case," it adds. 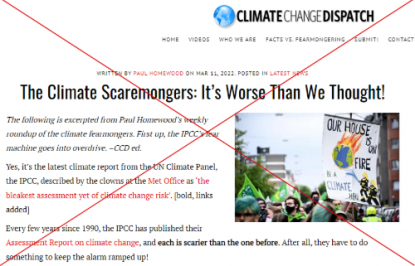 Screenshot of an online article taken on April 5, 2022

But the IPCC has clearly established an intensification of extreme weather events in its sixth major report since 1990 on climate change, which some people claim is not caused by human activity, despite the overwhelming scientific consensus that it is.

Andrej Mahecic, head of communications and media relations for the IPCC, says the article's "claim is contradictory" to what was said in the first part of the report, which was published in August 2021.

It states: "Human-induced climate change is already affecting many weather and climate extremes in every region across the globe. Evidence of observed changes in extremes such as heatwaves, heavy precipitation, droughts, and tropical cyclones, and, in particular, their attribution to human influence, has strengthened since" the previous assessments published in 2013 and 2014.

The Climate Change Dispatch article also claims: "Human health, contrary to the IPCC's assertions, is far better than it has ever been, access to clean water has much improved, food production is at all-time highs."

This is a misinterpretation of what the IPCC says in the portion of its report on past and future impacts of climate change and the limits of our ability to adapt, which was published in February 2022.

Guéladio Cissé, a coordinating lead author of one of the chapters in that part of the report, said: "The IPCC is not denying anywhere that human health is globally (making) progress."

Cissé, who is also the head of a research unit in the department of epidemiology and public health at the Swiss Tropical and Public Health Institute in Basel, said the report highlights how climate change inequitably harms human health. 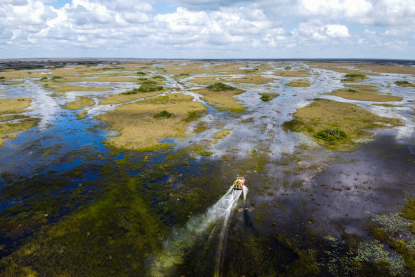 The IPCC found that global warming has already contributed to species decline and extinction, an increase in vector-borne disease, more deaths due to heat and drought, reduced yields in staple crops, water scarcity, and a decline in fisheries and aquaculture.

Tamma Carleton, assistant professor of environmental economics and climate change at the Bren School of Environmental Science and Management at the University of California in Santa Barbara, said IPCC scientists have also explored what would have happened without the impact of global warming.

This does not, however, discount positive developments in food production, incomes and health indicators.

"These are not claims about yesterday as compared to today," she said. "The IPCC tells us we are missing out on additional gains that could have been made over the last few decades, had climate change not been slowing progress in these key areas."

The Climate Change Dispatch article claims: "The IPCC has no way of knowing the agricultural production and food supplies would have been greater nowadays without the effects of climate change."

"Actually the IPCC has very well-established and peer-reviewed (over several decades) ways of analyzing the effects of climate change on crop yield and agricultural productivity in general," she said.

"For example, it is clear that the frequency in extreme heat and extreme droughts events have increased, this can be linked to climate change thanks to well verified models, and it does not even take any model to know extreme heat and drought can reduce crop yield or even fail the harvest altogether. Farmers in many regions including in the US have witnessed it already." 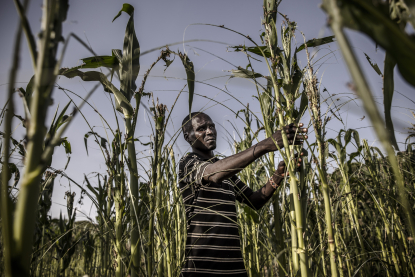 This picture released by The Food and Agriculture Organization of the United Nations (FAO) shows the severe damage to maize crops in Napeikar, Turkana County, Kenya on June 2, 2020 ( FAO / AFP / Luis Tato)

While the Climate Change Dispatch article points out that food production has increased since the 1960s, this does not invalidate the IPCC's assessments.

Dalin said: "The IPCC says productivity has increased more slowly due to climate change, not that it has decreased, and this has not happened everywhere."

This was confirmed by Toshihiro Hasegawa, researcher at the Japanese National Agriculture and Food Research Organization and coordinating lead author of a chapter on food and ecosystem products. "There is medium evidence and high agreement that climate change has already had overall negative impacts on agricultural productivity growth," he said.

Delphine Deryng, researcher at Humboldt University of Berlin and a lead author of a chapter on food and ecosystem products, also pointed to "robust evidence" through independent studies that climate change has slowed down agricultural productivity globally by four to five percent since 1961 for essential crops such as maize and wheat.

Deryng noted that the scientific assessments given in IPCC reports come from unpaid volunteers who are simply dedicated "to providing scientific information on the state of knowledge about climate change."

In the report's third and last installment, which was published on April 4, and focuses on the mitigation of climate change, scientists made clear that nations across the world are leading the planet toward catastrophic temperature rises with their current policies.

Jim Skea, a professor at Imperial College London and co-chair of the working group behind the report, said: "It's now or never, if we want to limit global warming to 1.5C.

"Without immediate and deep emissions reductions across all sectors, it will be impossible."

In the report, scientists warn that any rise above 1.5C risks the collapse of ecosystems and the triggering of irreversible shifts in the climate system.

A list of AFP's fact checks on environmental issues is available here.