“AFTER MILLIONS OF FOREIGN WORKERS WERE INTENTIONALLY BROUGHT IN FROM CHINA, NOW [Indonesian] CIVIL SERVICE JOB VACANCIES WERE ALSO GIVEN [to the Chinese],” reads a screenshot of a Indonesian-language WhatsApp message featured in this Facebook post on December 1, 2021.

“THE SCENARIO OF HANDING OVER [Indonesia’s] SOVEREIGNTY TO CHINA PLUS THE TRANSFER OF THE COUNTRY'S CAPITAL IS FINALLY COMPLETE,” the screenshot continues, referring to Jakarta’s plan to move its capital from Jakarta to East Kalimantan province.

The WhatsApp message then continues: "Astagfirullah Chinese citizens were given the opportunities to become public officials, while many Indonesians alone are still out of jobs! Oh God destroy this regime soon."

On top of the screenshot, there is a link to an Indonesian-language news article headlined: “1.4 Million Chinese Citizens Take the 2021 Civil Service Test, Competition Is Supertight”. 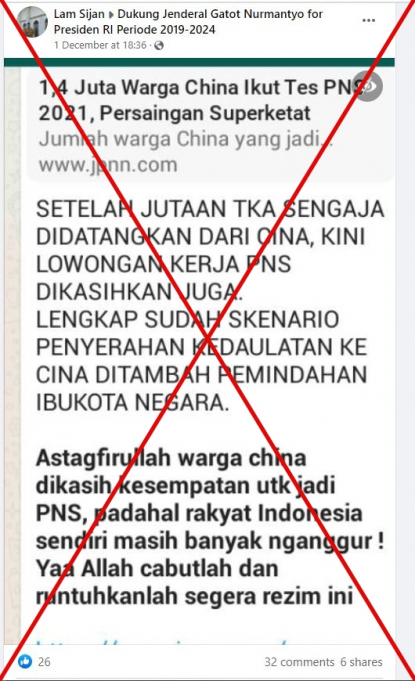 Indonesia's National Civil Service Agency (BKN) states on its website that those eligible to apply for the country's civil service positions are: "Indonesian citizens who wish and meet the requirements according to the regulations of each agency (formation, position, etc.) as long as the required age limit is met."

Below is a screenshot of the JPNN.com article: 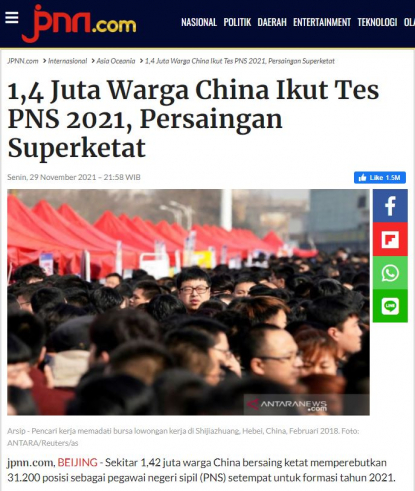 The article was originally a news report from Indonesian state news agency Antara, published on the same day here.

The first two paragraphs of the report read: "Around 1.42 million Chinese citizens faced a fierce competition vying for 31,200 local civil service positions in 2021.

"The number of civil service job applicants rose 40 percent compared with last year, according to the National Civil Service Agency (NCSA) as quoted by local media on Monday."

State-run newspaper China Daily published this report on November 29, 2021, saying: "The national civil service exam for recruitment next year was held on Sunday, with 1.42 million people sitting for it, about 40 percent more than last year. Only 31,200 will be recruited, making the odds of getting a position about 1 in 46."

Articles from JPNN.com, Antara and China Daily do not reference Indonesia.

The Southeast Asian country hosted 35,781 workers from China — around 36 percent of the country’s total foreign workforce, according to official figures from May 2020.