No, this video does not show Indonesian police officers speaking Chinese

A video has been viewed tens of thousands of times in multiple posts on Facebook, Twitter and YouTube which claim it shows Indonesian police officers speaking Chinese while they face post-election riots in Jakarta. The claim is false; the voices heard on the video’s audio are speaking Madurese, a regional Indonesian language. 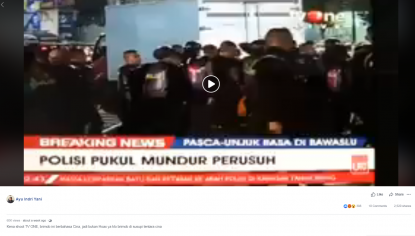 The post’s Indonesian language caption translates to English as: “Incidentally shot by TV ONE. Brimob officers speak Chinese. So, that Brimob has been infiltrated by Chinese soldiers is not a hoax.”

TV One is an Indonesian broadcaster. This is its website.

Riots broke out in some parts of Jakarta on May 22, 2019, after thousands of supporters of defeated presidential candidate Prabowo Subianto protested polls results announced the day before. Here is an AFP report on the events.

Bawaslu is the Indonesian-language acronym of the country’s General Elections Supervisory Agency. Here is its official Facebook page.

The claim is false; the voices heard on the video’s audio are speaking Madurese, a regional Indonesian language.

The video footage in the misleading posts was taken from a genuine TV One report, which the TV station uploaded on its official YouTube channel here on May 21, 2019.

The video in the misleading social media posts corresponds with the Tv One YouTube video from 1:27:30 and 1:27:59.

Chinese-speaking AFP reporters listened to the video’s audio and confirmed the language being spoken was not Chinese.

“They are speaking Madurese,” Sapariah Saturi, a Jakarta-based journalist who speaks Madurese, told AFP by email on May 23, 2019.

According to Sapariah, the people in the video in the misleading social media posts can be heard saying in part: “Like this … It is second to none … [clearing his throat, then laughing] … Because I did not … [inaudible] … I lost out …”

Madurese is a language spoken largely by people in the Indonesian island of Madura and the eastern part of Java island.