No, this video does not show Indonesia's police chief issuing an order to shoot 'citizens'

A video that has been viewed tens of thousands of times in multiple social media posts purports to show Indonesian police chief Muhammad Tito Karnavian issuing an order to shoot ordinary citizens. The footage has been doctored from an original video that shows Karnavian ordering police to shoot violent robbers.

This Facebook post dated May 22, 2019, which has been viewed around 44,000 times, contains a nine-second video clip of Karnavian speaking to police officers.

Here is the official police website which lists Karnavian’s position.

The Indonesian-language caption of the misleading post translates to English as: "A minister closed down access to social media so people are not influenced by hoaxes, but in reality it is so people are not aware of the tragedy today, May 22, 2019. A shocking statement from the police general: 'ordinary citizens can be shot'. What have citizens done wrong, Sir, so they can be shot????!!!!" 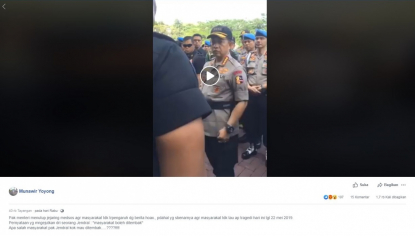 "The tragedy" refers to riots and clashes between police and supporters of presidential challenger Prabowo Subianto on May 21 and 22, 2019, in which several people died. Here is an AFP report about the incident.

Below is an English translation of the purported conversation between Karnavian and the police officer as shown in the clip:

The same video with a similar claim was also posted elsewhere online, for example on Facebook here and Twitter here.

AFP used a keyframe from the clip to conduct a Yandex reverse image search and found a longer version of the video here on YouTube.

Translated to English, the title of the YouTube video reads: “The police chief gives signal that motorcycle gang can be shot in sight.”

Motorcycle gang is a reference to violent robbers operating on motorbikes. Here is a Jakarta Post article on the issue.

The caption of the video translates to English as:

“The gang members have always carried sharp weapons such as machete in their actions. The remarks from the police chief indicating to shoot in sight people with machete who are identical with motorcycle gang. The video was previously uploaded by Herry Potlot in BERITA SEKITAR KARAWANG FB group.”

The original 15-second Facebook video, posted on May 16, 2019, can be seen here with an Indonesian-language caption that says:  “Many gangsters. This is police's action..”

Below is the English translation of Karnavian’s conversation with the officer as shown in the complete version of the video:

Karnavian: "I want to ask. In the field, if a person suddenly comes with a machete and wants to kill ordinary citizens, can they be shot?"
Officer: "Yes, they can be, General!"
Karnavian: "Good!"
Officer: "Yes."