No, this image does not show Muslim protesters eating at a 2019 post-election rally in Jakarta during Ramadan

An image has been shared hundreds of times in multiple Facebook posts which claim it shows Muslims eating at a post-election rally in Jakarta on May 21 and 22, 2019 during Ramadan, the fasting month. The claim is false; the photo has circulated online since at least 2014 in a blog post unrelated to the Indonesian elections.

It has been shared more than 700 times.

It shows a row of men sitting on a kerbside eating. Some of them can be seen wearing traditional Muslim attire. 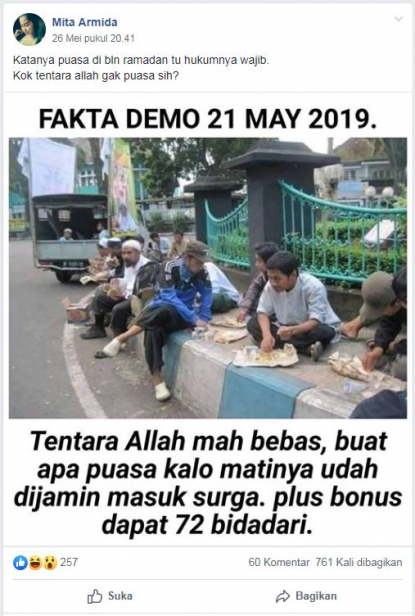 The Indonesian-language text on the photo translates to English as: “A fact of the May 21, 2019, rally. God’s army can do whatever they like, what's the point of fasting if they have been guaranteed to go to heaven when they die. Plus they will get 72 angels as a bonus.”

The post refers to a rally on May 21 and May 22 in Jakarta, which thousands of people attended to protest the re-election of President Joko Widodo.

This is an AFP report published on May 22, 2019, about the rally and a subsequent clash between police officers and supporters of presidential challenger Prabowo Subianto.

The misleading Facebook post’s caption translates to English as: “It is said that fasting during the month of Ramadan is obligatory. How come God’s army do not fast?”

The same photo has also been shared by in Facebook posts here and here alongside a similar claim.

The claim is false; the photo has circulated online since at least 2014 in blog posts unrelated to the Indonesian elections.

Reverse image searches on Google and Yandex found the same photo was published in this blog post on November 26, 2014, by Kompasiana, a citizen media blogging platform of Indonesian news portal Kompas.

The Indonesian-language blog post reports on an Indonesian packed rice dish called “nasi bungkus”. The photo was published in the blog post as an illustrative image.