Indonesia’s Morowali industrial site employs 43,000 people, but only 5,000 workers are from China

Two screenshots of Indonesian media reports have been shared almost 2,000 times on Twitter and Facebook alongside a claim that an industrial site in Indonesia employs 40,000 foreign Chinese workers. The claim is misleading; as of February 2020, 43,000 people are employed at the Chinese-controlled industrial complex cited in the social media posts, but only about 5,000 of them are from China and the remaining 38,000 are Indonesian citizens.

The screenshots appeared here in an image on Twitter on February 4, 2020. The post has been retweeted more than 840 times.

Since its emergence in the central Chinese city of Wuhan in late 2019, the novel coronavirus has killed at least 900 people and infected some 39,800 others in China alone, as reported here by AFP on February 10.

The same image also appeared on Facebook with a similar claim here, here, here and here, and has been shared more than 1,000 times.

The claim is misleading. The industrial park in Morowali employs 43,000 people – but only around 5,000 of them are Chinese citizens while the remaining 38,000 are Indonesian citizens.

A keyword search on Google found this Warta Ekonomi report published on January 31, 2020. It has the same headline and photo as seen in the misleading post.

Below is the screenshot of Warta Ekonomi’s report: 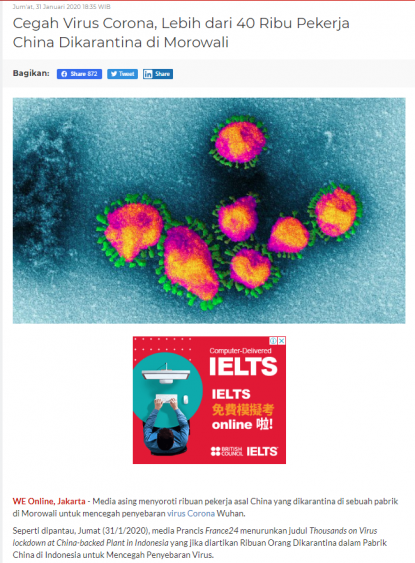 The report's first two paragraphs translate to English as: “Foreign media put a spotlight on thousands of workers from China who are being quarantined at a factory in Morowali to prevent the spread of the Wuhan coronavirus.

The report cited by Warta Ekonomi is an AFP article that was republished by France 24.

The second and third paragraphs of the AFP article state the overall number of the workers and the number of foreign Chinese workers at the industrial park: “PT Indonesia Morowali Industrial Park has sealed off its nickel mining hub on Sulawesi island and is barring any of its 43,000 staff from entering or leaving without written permission.

“There are some 5,000 guest workers from mainland China at the sprawling site which hosts nickel ore smelters and stainless steel production.”

The figures came from the company’s spokesman, Denny Kurniawan. In a WhatsApp message to AFP on January 31, 2020, he wrote, “There are some 5,000 foreign workers from mainland China and 38,000 Indonesian workers” at IMIP.

Although the Warta Ekonomi headline states, “More Than 40,000 Chinese Workers Quarantined in Morowali”, the fifth paragraph of its report quotes a paragraph from the AFP story that “there are some 5,000 guest workers from mainland China” in Morowali.

Below is the screenshot comparison between Warta Ekonomi report in the misleading post (L) and the report on the website (R):

Another keyword search on Google found this Tempo published on January 26, 2019.

It has the same headline and photo seen in the screenshot in the misleading post.

Below is the screenshot of Tempo’s report: 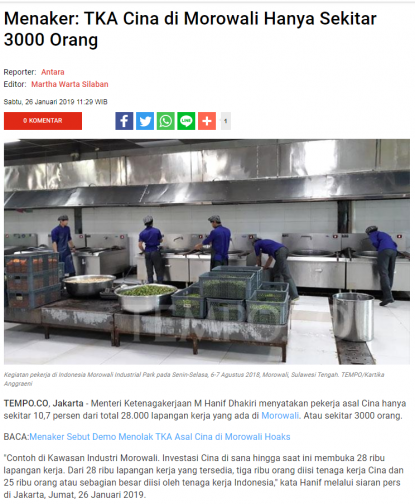 The report's first two paragraphs translate to English as: “Manpower Minister M. Hanif Dhakiri said the number of foreign workers from mainland China was only 10.7 percent from the total 28,000 workers in Morowali. Or about 3,000 people.

“‘For example in the Morowali Industrial Area. The Chinese investment there has so far provided 28,000 jobs. Of the 28,000 available jobs, three thousand people are Chinese workers and 25,000 are mostly Indonesian workers,’ Hanif said in a press release in Jakarta, Friday, January 26, 2019.”

Below is the screenshot comparison of the Tempo report in the misleading post (L) and the report on the website (R):

Hanif Dhakiri was Indonesian manpower minister from 2009 to 2014.

He issued a statement in January 2019 about the number of Chinese workers in the industrial park after a video went viral with a false claim that it shows “tens of thousands of Chinese workers protesting in Morowali”. The claim has been debunked by Tempo here.