A video has been viewed thousands of times in multiple posts on Facebook, Twitter and YouTube, shared alongside a claim that it shows China’s leader praying at a mosque following the novel coronavirus outbreak.  This claim is false; this video has circulated since at least 2016 in media reports about Chinese President Xi Jinping’s visit to a mosque in northwest China.

The one-minute video was published here on Facebook on February 3, 2020. It has been viewed more than 250 times. 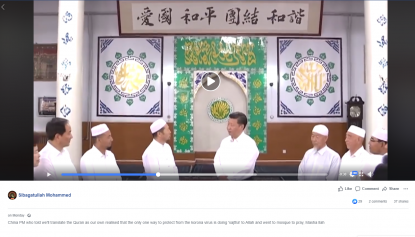 The logo of Chinese state media CCTV can be seen in the top-right corner of the video.

The post’s caption reads: “China PM who told we’ll translate the Quran as our own realised that the only one way to protect from the korona virus is doing ‘sajtha’ to Allah and went to mosque to pray, Masha llah.”

“Korona virus”, or novel coronavirus, is an epidemic that has killed at least 630 people and infected some 30,000 others in China since its emergence at a wildlife market in the central Chinese city of Wuhan in late 2019, according to this AFP report dated February 7, 2020.

The current Chinese prime minister is Li Keqiang. Here is his biography at the Chinese government’s website.

However, the claims are false; this video shows Chinese President Xi Jinping’s visit to a mosque in northwest China in July 2016.

A reverse image search of keyframes extracted from the video found this footage, published on the official YouTube channel of Chinese news agency CCTV, on July 20, 2016.

Below are screenshot comparisons of the misleading Facebook video (L) and the CCTV video (R): 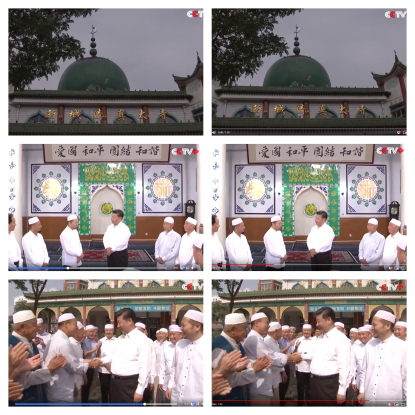 President Xi’s visit to the mosque in July 2016 was also reported by local and international media here and here.