A video clip showing a crowd quickly dispersing amid what sounds like gunshots has resurfaced in social media posts in Nigeria claiming to capture the recent unrest in Nigeria’s southeastern region. But the claim is false; the video clip was first debunked a year ago by AFP Fact Check after it was falsely used to depict Nigerians protesting against a Supreme Court ruling.

The 15-second video clip is filmed from above and shows a large crowd converging on a dusty junction. The people suddenly disperse in different directions after hearing sounds similar to gunshots.

“Still on run Orlu is still on fire,” reads the caption in a Facebook post, referring to the video which has been viewed more than 27,000 times since publication on January 26, 2021, according to data provided by the social network. 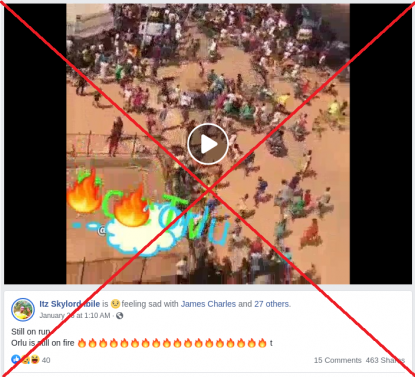 Orlu is located in Nigeria’s southeast, a region that has long been a hotbed for separatist groups, and where tensions between federal security forces and the indigenous Igbo population have been high.

Recent clashes in Orlu between the Nigerian army and a local militia promoted by Nnamdi Kanu, the leader of Nigeria’s proscribed separatist movement Indigenous People of Biafra (IPOB), left at least one person dead as reported by AFP.

However, the video clip is unrelated to this recent violence.

It previously circulated online in 2020 during a protest in Nigeria against a Supreme Court ruling that removed the former governor of Imo state, and also in Tanzania during a vote in the country’s autonomous region of Zanzibar. 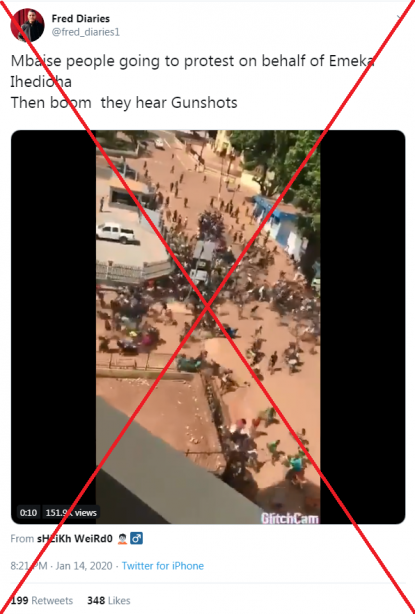 Screenshot showing the same footage on Twitter with a different claim

AFP Fact Check first debunked the video here in January 2020, and established that it was posted online a day before the state election in Nigeria was nullified by the Supreme Court.

“I saw the video on one of my friends’ WhatsApp statuses, so I saved it through an app ‘WhatsApp status saver’ and posted it here (Twitter),” said Muhammad Aminu, the owner of the Twitter account that published the earliest version of the clip. “That’s all I know.”

While the precise location of the video remains unknown, it predates the unrest that occurred this year in Orlu.

Since clashes began in Orlu on January 22, 2021, numerous images have been shared online alongside false claims that they document the violence. AFP Fact Check has debunked them here.