“Against all forms of military coups. Democracy doesn’t have borders. #SaveAungSanSuuKyi,” the Thai-language caption reads. The photo apparently showing soldiers pointing their guns at Suu Kyi was published in French and Vietnamese news articles about the military coup. It also circulated on Twitter.

A keyword search found another version of the photo in an article by British newspaper The Guardian on January 1, 2012. The headline reads: “The Lady - review”.

The photo is captioned: “The Lady: a love story that shows exemplary courage”. 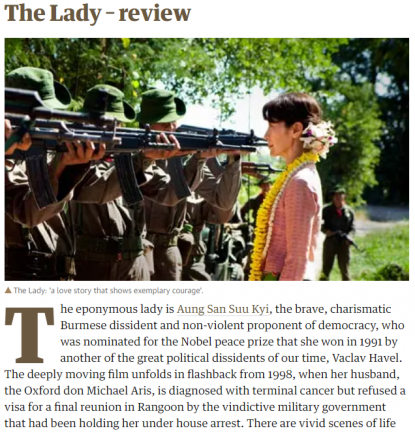 Screenshot of The Guardian's review of The Lady, taken on February 2, 2021

The film’s trailer on movie database IMDb features the scene depicted in the photo.

The page describes the film as “the story of Aung San Suu Kyi as she becomes the core of Burma's democracy movement, and her relationship with her husband, writer Michael Aris.”

The woman in the photo is not Suu Kyi, but Malaysian actress Michelle Yeoh.