A gallery of photos has been shared hundreds of times on Facebook alongside a claim that accuses South African politicians of living a high life while the country looks like a “dumping site”. While the photos are real, at least four of them date back several years and are mostly confined to a single area of the country’s financial capital Johannesburg.

A Facebook post published on May 9, 2021, and shared more than 300 times in South Africa includes pictures of heavily littered streets in what appears to be Johannesburg’s central business district.

“How can you say it proudly that you are leaders of SA... When it looks like a dumping site nd you living high lavishly life in your porsh houses built out of hard earned Tax payers money? CRY SA OUR BELOVED COUNTRY (sic),” reads the post’s caption. 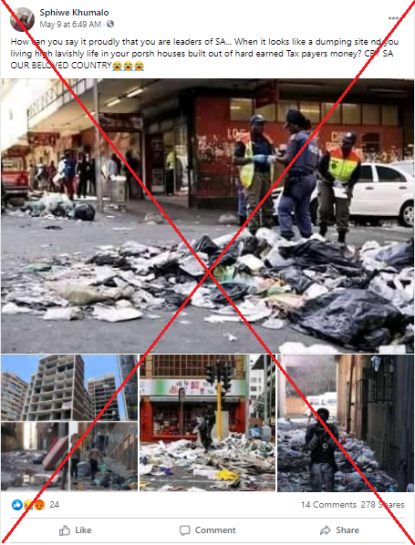 While refuse collection and illegal dumping are a blight in many parts of South Africa, these images are several years old and relate either to isolated protests or depict the same inner-city area of Johannesburg.

After several reverse image searches, AFP Fact Check found the main photograph in a TimesLIVE article from September 14, 2017. Mpumeleo Buthelezi is credited as the photographer.

The article described how a group of about 100 people had taken to trashing the streets in Johannesburg after their contracts with a refuse collection company had lapsed.

“Hillbrow has become a pigstile as refuse collection is not being done. Residents say this has been going on for weeks. Some of the streets that have become a filth include Pretorius, Esselen, Twist, Quarters and Claim (sic),” the photo’s caption reads. 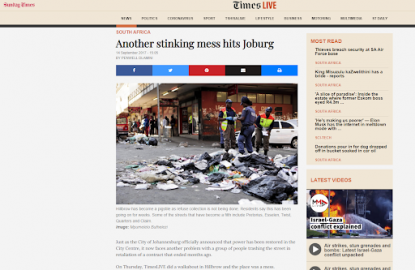 A screenshot of the September 14, 2017 article on Times Live

The second image is a collage of three pictures all taken in Johannesburg.

The first shows a cropped picture of an abandoned building in Berea, Johannesburg.

It’s the most recent picture among those in the misleading post: AFP traced the photo to a tweet from January 8, 2021, promoting an episode for news channel eNCA’s TV segment of Crime Watch in the inner-city neighbourhood of Hillbrow.

The next picture in the set of three is also of Hillbrow, taken during a participatory photography project in April 2015 that focused on migrant women sex workers in South Africa. 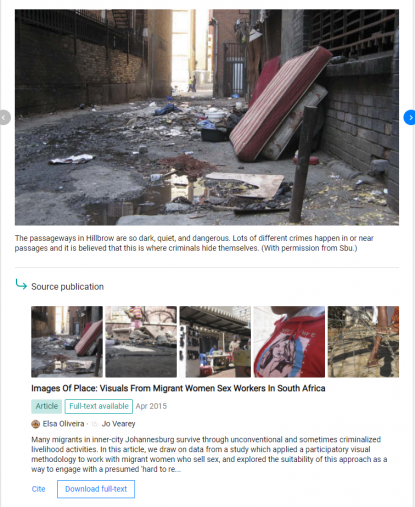 A screenshot of the photograph as it appears on Researchgate, taken on May 17, 2021

The last in the collage shows two men carrying a large woven plastic bag up a filthy street.

According to a reverse image search on search engine TinEye, the picture has been online since at least February 16, 2013. However, the link from the search result failed to open on the site, which appears to be a blog in Greek. 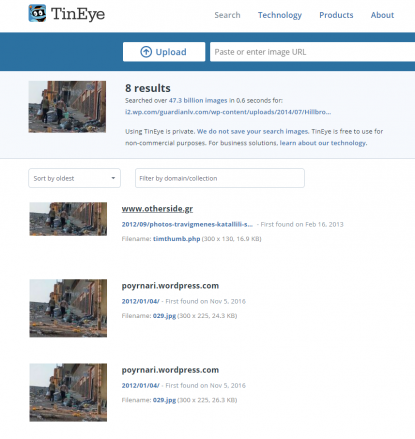 The earliest available version AFP Fact Check could find was in an article from Las Vegas-based media Liberty Voice published on July 4, 2014. However, this article did not credit the photographer.

The article unpacked the growing crime and sanitation issues in Hillbrow, which was once “a trendy, cosmopolitan city and a safe place to live, with striking tall buildings and clean streets.” 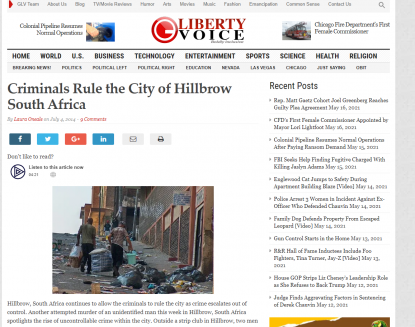 A screenshot of the picture in an article on July 4, 2014

The third image centred below the main photograph in the Facebook post shows litter around a yellow traffic light. AFP Fact Check found it in another article on TimesLIVE from December 3, 2015, taken by photographer Moeletsi Mabe.

The article reported on the end of a strike by 5,200 waste collectors who had been protesting for higher salaries.

There also appeared to be an earlier version of the image on the same website from the day before, but the slideshow gallery has since been removed. AFP Fact Check found the archived version on Wayback Machine. 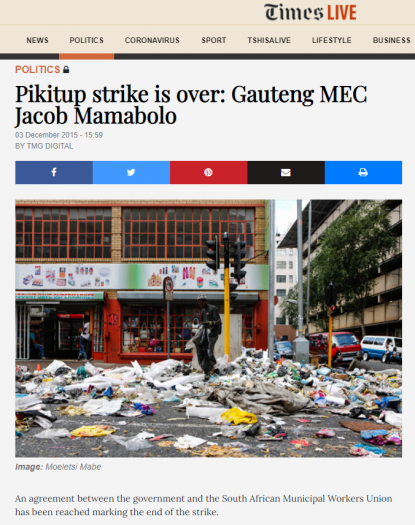 A screenshot of the picture in a Times Live article on December 3, 2015

Reverse image searches revealed that the earliest version of the last photograph appeared online in an article from February 25, 2016, by Canada’s The Globe and Mail.

The organisation Rooftops Canada told AFP Fact Check that the photo was taken in July 2015 during a research and exchange visit by Canadian social and housing activists to South Africa.

“It is in an alley in Hillbrow, in the area where the eKhaya project has been organising the community and building owners for many years,” said Barry Pinsky, executive director of Rooftops Canada.

At the time, the organisation was collaborating with the City of Johannesburg to clean up the neighbourhood’s alleys, Pinksy added.

He also directed AFP Fact Check to another image, taken by photographer Jerry Boyer at the time, and published in an article on August 12, 2015.

Both photos show the same piece of rubbish hanging from a structure on the wall to the right. The man in the picture is wearing the same striped shirt.

Waste management issues in South Africa’s central business district are long-standing -- most of them due to overcrowding and “intermittent refuse removal services”, as highlighted in this May 9, 2018, report.

Authorities said in December 2018 that high volumes of traffic in those areas made it more difficult to keep the streets clean.

Clean-up efforts were boosted during South Africa’s March 27, 2020, lockdown for Covid-19 when officials took advantage of the significantly quieter times to clean up the streets. City bosses posted pictures of cleaner-than-usual taxi ranks on the administration’s official Twitter page.

Do not be the first one to drop that paper, plastic, can, gum, whatever. Do not. We have cleaned up, don’t litter again. #lockDownSouthAfrica #day3oflockdown #CoronaUpdate ^TK pic.twitter.com/0KfgDxZCJN

Multiple initiatives involving residents and non-profit organisations (here and here) have been launched in Johannesburg to try to limit the health and safety issues caused by localised pollution.