A photo of Argentinian football player Lionel Messi is being shared online alongside a claim that the striker is boycotting a match against Israel because he refuses to play “against people who kill innocent Palestinian children”. This claim is false; the quote is fabricated, and versions have been circulating online since 2018. AFP Fact Check had already debunked the claim at the time.

The Facebook post, which includes an image of Messi and the Palestinian flag, has been shared nearly 250 times in Nigeria since it was published on May 20, 2021.

A quote within the image, attributed to the Argentinian footballer, reads: "As a UNICEF ambassador, I cannot play against people who kill innocent palestinian children. We had to cancel the game because we are humans before footballers”. 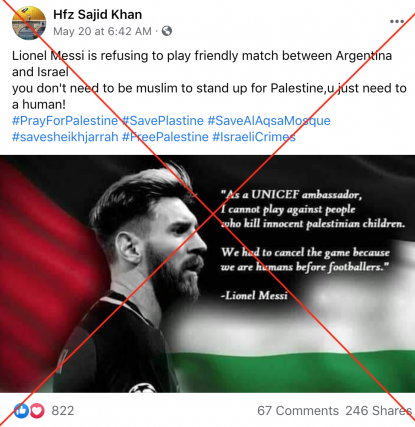 The caption further implies that Messi’s purported advocacy is related to the recent fighting between Israel and armed groups in Gaza.

“Lionel Messi is refusing to play friendly match between Argentina and Israel you don't need to be muslim to stand up for Palestine,u just need to a human! (sic),” the post’s caption reads.

But Messi did not make any statement regarding the latest Israeli-Palestinian conflict.

AFP Fact Check first discredited this claim in 2018 when Argentina pulled out of a World Cup warm-up match against Israel after the game was moved from Haifa to Jerusalem, further angering Palestinians already upset by the US government’s relocation of its embassy to the contested capital city, as AFP reported.

Unspecified “threats” against the Argentinians saw the game called off.

The quote attributed to Messi was widely shared on social media at the time, with claims that he made the statement during an interview with Argentinian television channel TyC Sports.

However, the channel denied speaking to Messi.

“What you are writing is false. Messi has not spoken to the media and not with TyC Sports on this subject. Be accurate. During his preparations for the World Cup, Messi is not talking to the press,” TyC sports reporter Martin Arevalo tweeted at the time.

No recent statement from Messi

Furthermore, the Argentinian footballer has not shared anything on social media about the Israeli-Palenstinan conflict in 2021.

Messi's communications director confirmed to AFP Fact Check that the striker never uttered the words credited to him.

"There have been no statements from Leo either now or three years ago,” he told AFP Fact Check on May 18, 2021.

Messi has served as a Unicef Goodwill Ambassador since 2010, using his global profile to raise awareness of children in need.

Recent fighting between Israel and armed groups in the Palestinian territories started on May 10 when Hamas fired rockets from Gaza into Israel, sparking retaliatory air strikes from the Jewish state’s military.

The 11-day conflict  stopped following a ceasefire brokered by Egypt that took effect on May 21, as AFP reported.

Israeli military strikes on Gaza killed more than 250 Palestinians and wounded over 1,900 people in 11 days of conflict, the health ministry in Gaza said. Rocket and other fire from Gaza claimed 12 lives in Israel, medics say. More than 350 people in Israel have been wounded.