A Facebook post shared hundreds of times in South Africa claims that Portuguese football star Cristiano Ronaldo sent a video message to Palestinians expressing solidarity with their plight. While it is Ronaldo who appears in the 21-second clip, he posted it on social media in 2016 in his capacity as a “Save the Children Global Artist Ambassador”.  In the video, Ronaldo is passing on a message of inspiration to children in war-ravaged Syria.

The post, which has seen been deleted, was published here on Facebook on May 16, 2021, and was shared more than 420 times before it was removed. 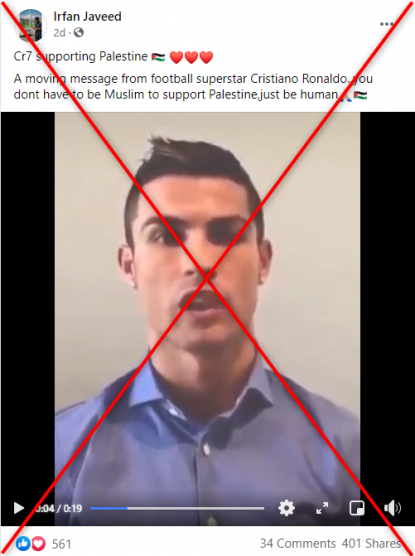 “Cr7 supporting Palestine. A moving message from football superstar Cristiano Ronaldo..you dont have to be Muslim to support Palestine, just be human (sic),” reads the caption on the post.

The same video was shared with a similar claim here.

An extract from Ronaldo's video also appears at the start of this video posted on Facebook with the caption: "Cristiano Ronaldo: Palestine, you are not alone palestine, the world is with you, we are with you (sic)."

Fresh violence erupted in the Gaza Strip in May 2021 between the Jewish state of Israel and armed Palestinian groups. AFP reported that more than 200 Palestinians, including 61 children have been reported killed thus far since the new conflict started.

Video shared in a misleading context

But the video has been shared in a misleading context: It shows Ronaldo sending a message of hope to Syrian children.

“This is for the children of Syria, we know that you’ve been suffering a lot. I am a very famous footballer, but you are the true heroes. Don’t lose your hope, the world is with you. We care about you, I am with you,” says Ronaldo in the clip.

AFP Fact Check found out the video was posted on December 23, 2016, on Ronaldo’s Facebook, Twitter, and Instagram accounts.  Save the Children also published an article about Ronaldo's video.

A message of hope to the children affected by the conflict in Syria. @SavetheChildren pic.twitter.com/Zsdvu2nuXd

The decade-long Syrian war has displaced more than 11 million people in the country and abroad. Almost 400,000 have been killed since the conflict started.