Argentina star Lionel Messi is quoted as refusing to play against "people who kill innocent Palestinian children" following the cancellation of a friendly match between Argentina and Israel. There is no evidence he made this statement.

Messi is widely quoted as telling Argentina sports channel TyC Sports: "As a UNICEF ambassador, I cannot play against people who kill innocent Palestinian children. We had to cancel the game because we are humans before we are footballers."

The quote widely shared on social media followed the decision by Argentina on June 6 to cancel their World Cup warm-up match against Israel in Jerusalem following pressure from the Palestinians.

However, TyC Sports reporter Martin Arevalo, writing from Barcelona where Argentina were preparing for the World Cup, said his channel had never spoken to Messi.

"What you are writing is false. Messi has not spoken to the media and not with TyC Sports on this subject. Be accurate. During his preparations for the World Cup, Messi is not talking to the press," he said in a widely shared tweet.

Messi, the five-time world player of the year, is not known for courting controversy or issuing political statements. As a UNICEF ambassador and global star anything he says is carefully vetted by his PR team and he has carefully steered clear of divisive issues.

Ahead of the game, Jibril Rajoub, president of the Palestinian Football Association, had urged Messi not to take part and called on fans to burn shirts bearing his name if he did.

After the match was cancelled, he thanked the Argentinians during a news conference, saying he hoped they would win the World Cup. 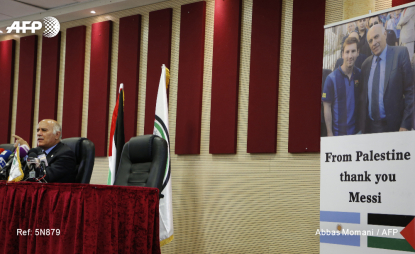