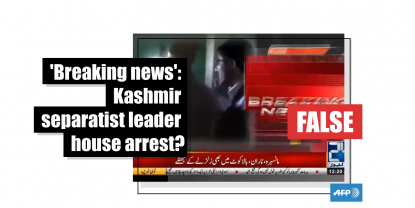 Published on Friday 9 August 2019 at 09:30
A Pakistani television channel shared a video on their YouTube channel, which has more than 2.5 million followers, in early August 2019 claiming it was "breaking news" footage of Kashmiri separatist leader Syed Ali Shah Geelani under house arrest. The claim is false; the video has circulated online in reports since at least April 2018; one of Geelani’s relatives told AFP the video was filmed in April 2018 while Geelani was under house arrest.
Read more 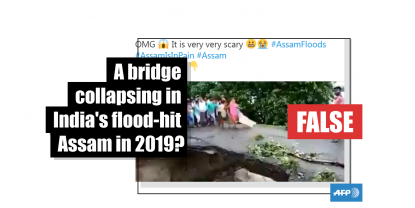 Published on Wednesday 31 July 2019 at 07:30
A video showing a bridge collapsing as three people run over it has been shared on social media alongside claims that the incident occurred in India’s northeastern state Assam during flooding in 2019. The claim is false; the video actually shows an incident in Bihar state -- some 500 kilometres to the west -- during floods there in 2017.
Read more 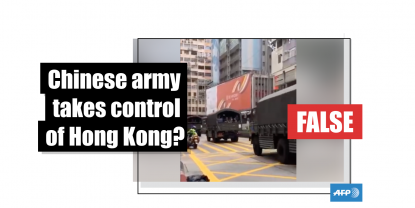 Published on Monday 29 July 2019 at 12:00
A video showing military trucks driving down streets in Hong Kong has been viewed tens of thousands of times in social media posts that claim Chinese soldiers are taking control of the city. Some of the misleading posts share a purported public announcement from Hong Kong authorities dated July 24, 2019 urging residents to stay home “for your own safety” while a military takeover is underway. The claims are false; the video has circulated online since November 2018; the Hong Kong government has released no such announcement.
Read more 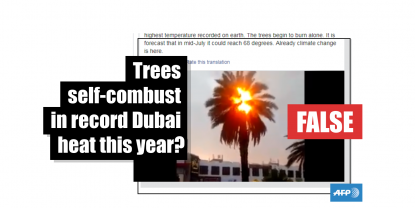 Published on Tuesday 23 July 2019 at 09:50Updated on Tuesday 23 July 2019 at 10:15
A video which shows bushes and a palm tree on fire has been viewed more than one million times in multiple posts on Facebook and Twitter which claim they self-combusted as temperatures reached 63 degrees celsius in Dubai this year. The claim is false; the footage shows two separate incidents in Kuwait and Saudi Arabia, both in 2017; the Guinness World Record for the highest temperature ever recorded on Earth is 56.7 degrees celsius in California.
Read more 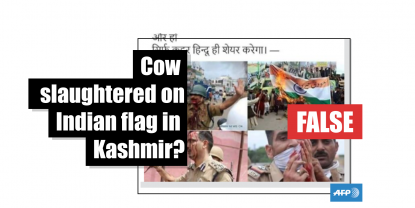 These photos have been taken from old reports about unrelated protests in India and Pakistan, not Kashmir

Published on Wednesday 17 July 2019 at 10:30
A photo collage has been shared tens of thousands of times in multiple posts on Facebook and Twitter which claim they show a cow slaughtered on the Indian flag in Kashmir. The images are being used in a misleading context; they have been taken from old reports about unrelated protests in India and Pakistan, not Kashmir.
Read more