A photo of police escorting a burqa-clad woman in handcuffs has been shared tens of thousands of times in multiple posts on Facebook, Twitter and Instagram which claim she was arrested in Australia for wearing a burqa. The claim is false; the photo is actually a 2015 AFP image of a woman who was arrested in Spain for allegedly recruiting other women to join Islamic State. 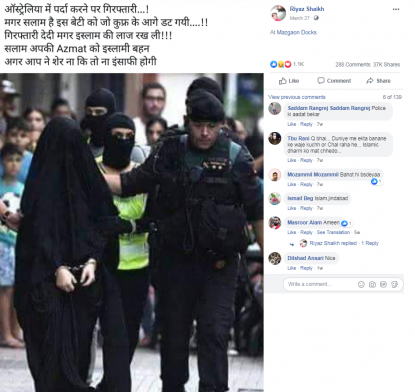 The Hindi-language text above the image translates to English as: "Arrested in Australia for wearing a burqa. But salute this daughter who has shown courage in front of disbelievers of Islam (police). Got arrested but saved the honour of Islam. Salute to your greatness, Islamic sister. If you do not share, then you would be doing injustice."

The burqa is an Islamic outer garment worn by women which covers the body and the face, according to this explainer published by Australian public broadcaster SBS.

The same claim has also been shared thousands of times alongside the same photo on social media, such as here on Facebook, here on Twitter and here on Instagram.

The claim is false; the photo is actually an AFP image showing a woman arrested in Spain for her alleged involvement in Islamic State (IS) recruitment.

The photograph was published here on the AFP Forum on September 5, 2015.

The caption of the picture says: “Spanish police arrest an 18-year-old Moroccan woman suspected of recruiting other women via the Internet to the jihadist group Islamic State (IS), in Gandia on September 5, 2015. She was the latest in a series of suspected IS sympathisers detained in Spain since last year over security fears. AFP PHOTO/ JOSE JORDAN”.

Gandia is a city located on the east coast of Spain.

Below is a screenshot of the AFP image: 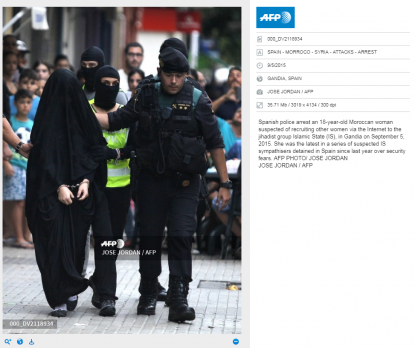