No, this video does not show police catching a burqa-clad man who tried to vote in the Indian elections

Multiple Facebook posts have shared a video which they claim shows police catching a burqa-clad man after he tried to vote for Congress in India's ongoing elections. The claim is false; the video was posted online in 2018 by a Sri Lankan news site in a report about a man disguising himself in a burqa for a revenge attack over debts.

The footage, which shows a man being forced to remove a burqa by uniformed police, was shared in this Facebook post on April 26, 2019 and has been viewed more than 500 times.

The misleading post's caption says in Hindi: "A beautiful woman coming to vote for Congress... friends, see the extent they will go to to defeat Modiji."

“Congress” is a reference to the Indian Congress Party, the country’s main opposition party. This is the party’s official Twitter page.

"Modiji" is a reference to India's Prime Minister Narendra Modi of the ruling Bharatiya Janata Party.

The same video was shared with a similar claim on Facebook here and here.

The misleading posts were published during India’s 2019 election, which lasts for six weeks and ends on May 19. Here is a recent AFP report about the polls. 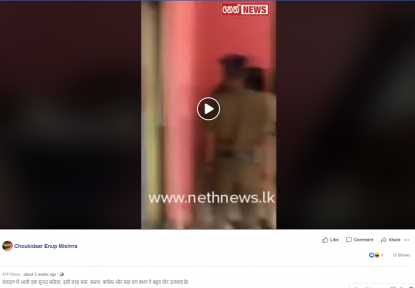 But the video was actually posted online in 2018 by a Sri Lankan news site in a report about a man who disguised himself with a burqa in a bid to attack someone over a debt issue in Colombo.

The video used in the misleading posts includes a logo for Sri Lanka based news site Neth News.

Through a keyword search, AFP found an extended version of the video published by Neth News here on YouTube and in this article published on August 30, 2018. 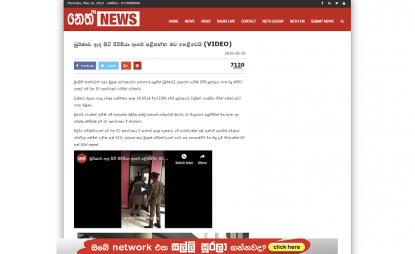 The Sinhalese-language headline translates to English as: "A man dressed in a burqa has come for revenge".

The story states that police arrested a man who disguised himself with a burqa in a bid to attack someone over a debt issue. The incident happened in a market complex in the suburb of Welikada in Colombo, according to the report.

Below is the video on the Neth News YouTube channel. The YouTube video directly corresponds with the video in the misleading Facebook posts from the 13 second mark until the 54 second mark.

The same video has previously been fact checked by AFP here after it circulated online alongside false claims related to the 2019 Easter Sunday bombings in Sri Lanka.

No, these are not photos of a bird killed by Cyclone Fani in 2019

No, this is not a real photo of India’s main opposition leader with a black eye