Two posts shared on a Facebook page in South Africa are advertising purported jobs for general workers and cleaners at the state-owned power company Eskom. However, the posts are a scam, and the power utility denied having any association with the page behind the listings.

The advert was first posted here on Facebook on May 17, 2021, on a page called “Jobs South Africa”. 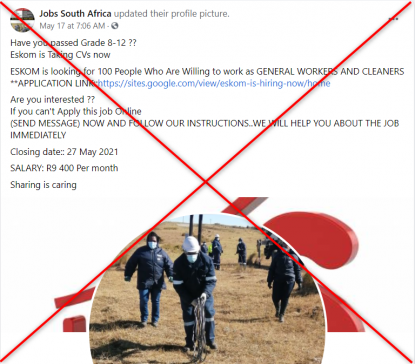 It claimed Eskom was looking to hire 100 people as general workers and cleaners.

Applicants are then asked to submit their forms using a Google Sites link, or to send a direct message to the Facebook page for further instructions.

Eskom is a public utility firm that generates, transmits and distributes electricity for commercial and domestic use in South Africa.

However, the job listings are a scam. Eskom’s media department confirmed to AFP Fact Check that it has no association with the Facebook page in question and that it has not advertised these jobs.

“Eskom did not advertise the jobs in question. We are aware of several such pages and have received a number of complaints from members of the public about fraudsters masquerading as Eskom staff who have scammed them with non existing jobs,” a representative told AFP Fact Check.

The company added that it only advertises positions on its official website and social media pages, and in the mainstream media.