Skip to main content
Hindu devotees carry chariots as they participate in the Pahchare Chariot festival in Kathmandu on April 12, 2021. (AFP / Prakash Mathema)

Multiple Facebook posts in May 2021 claim that Nepal has been officially declared a "Hindu state". The claim is false: no such official announcement has been made by the Nepali authorities; the country’s constitution still describes it as a secular state not a Hindu state; the images used in the misleading posts have circulated online for years.

"Today Nepal was declared a Hindu state. It is now the first Hindu state on earth," says the Bengali-language caption of a Facebook post on May 21, 2021.

The claim is accompanied by two images showing large crowds of people celebrating. Similar claims were made in multiple other Facebook posts, for example here, here and here.

According to the Constitution of Nepal, published on the government’s official website, the country is ‘‘an independent, indivisible, sovereign, secular, inclusive, democratic, socialism-oriented, federal democratic republican state.’’

Below is a screenshot of the document, with the relevant paragraph highlighted by AFP: 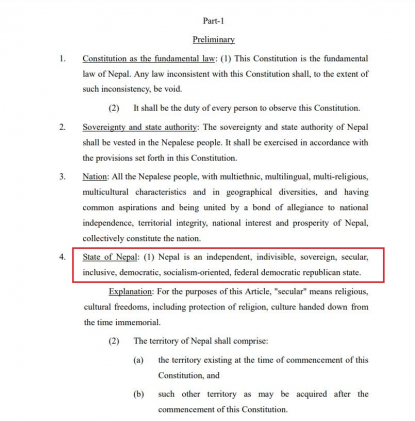 A screenshot of the Constitution of Nepal on Nepal’s official government website taken on June 9, 2021, with the State of Nepal part highlighted by AFP in red.

The first image used in the misleading Facebook posts is actually a photograph by Tsering Topgyal of AP news agency which was taken on September 22, 2015.

The caption of the photo on the AP website reads: ‘A Nepali woman shouts slogans during a protest against the Nepalese government and demanding it be restored as a Hindu nation, in New Delhi, India, Tuesday, Sept. 22, 2015.’

Below is a screenshot comparison between the first photo in the misleading posts (L) and the AP photo (R):

Reverse image searches could not trace the second photo to its origin. But a version of the photo was found uploaded on a Nepali Facebook page in 2017.

Below is a screenshot comparison between the second photo in the misleading posts (L) and the photo in the 2017 post (R):

Google keyword searches found no reports from Nepali or international news outlets related to a recent Nepali constitutional change from a secular state to a Hindu one.